“Surely, when it comes to shooting itself in the foot, Europe truly has no equal.” 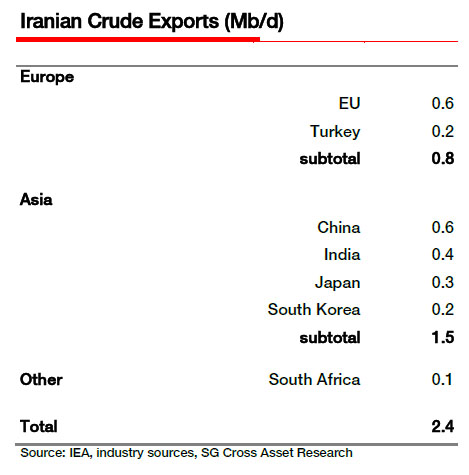 The geopolitical game theory escalates once again, as Iran, which four days ago halted exports to peripheral European countries took it up a notch, and has as of this morning halted sales to British and French companies. Reuters reports: “Iran has stopped selling crude to British and French companies, the oil ministry said on Sunday, in a retaliatory measure against fresh EU sanctions on the Islamic state’s lifeblood, oil. “Exporting crude to British and French companies has been stopped … we will sell our oil to new customers,” spokesman Alireza Nikzad was quoted as saying by the ministry of petroleum website.” Here is the actual statement from MOP.ir. As a reminder, on January 27 we said how Iran was about to “Turn Embargo Tables: To Pass Law Halting All Crude Exports To Europe.” And so it has – now, the relentless media campaign about China isolating Iran in response to American demands has to be respun: recall that in early February Reuters told us that “China will halve its crude oil imports from Iran in March compared to average monthly purchases a year ago, as a dispute over payments and prices stretches into a third month, oil industry sources involved in the deals said on Monday.” Apparently that may not have been the case, as there is no way Iran would have escalated as far as it has unless it had replacement buyers of one third of its crude. Incidentally, this is just as we predicted in “A Very Different Take On The “Iran Barters Gold For Food” Story.” The end result of this senseless gambit by the west: Europe has less oil, the Saudi fable that it has endless excess suplies is about the be seriously tested, China has just expanded a key crude supply route, and Russia is grinning through it all as Brent prices are about to spike. Iran didn’t invent chess for nothing.

This is what we cautioned in early February:

we humbly submit that instead of taking the Reuters article at face value, and one may certainly do that, what may instead be happening as Iran migrates to a non-dollar based international trade system is the testing of the waters of a non-USD regime, more importantly, one quietly encourage by  China, who is a very complicit participant in the transition to a world in which the US Dollar suddenly finds itself irrelevant. Whether replaced by gold, or a currency backed by a basket of hard assets (the CNY?) we don’t know. However, we know one thing: China needs Iran’s crude, which at last check was among the world’s top 5 oil producers, and had the world’s third largest proven oil reserves after Saudi Arabia and Canada, and despite media reports that it is actively looking for crude import alternatives, we would allege that this is nothing but purposeful disinformation. After all why would China comply with US demands for an enhanced Iranian embargo? The whole point of China’s foreign policy to date has been to counteract US pushes and provocations abroad without fail. Why should it make an exception now. Frankly, we don’t buy it.

Sure enough, ten days later neither does the world.

Industry sources told Reuters on Feb. 16 that Iran’s top oil buyers in Europe were making substantial cuts in supply months in advance of European Union sanctions, reducing flows to the continent in March by more than a third – or over 300,000 barrels daily.

Among European nations, debt-ridden Greece is most exposed to Iranian oil disruption.

Motor Oil Hellas of Greece was thought to have cut out Iranian crude altogether and compatriot Hellenic Petroleum along with Spain’s Cepsa and Repsol were curbing imports from Iran.

As we tweeted a few days ago, “Greece may be broke buit at least it has no oil.”Win-win. Er… wait.

Needless to say, it is now time for Saudi Arabia to step up or shut up. And if many are correct, stripping away all the posturing about Saudi’s near infinite excess supplies, may reveal a very ugly picture. And a $10 spike in brent in short order.

Saudi Arabia says it is prepared to supply extra oil either by topping up existing term contracts or by making rare spot market sales. Iran has criticised Riyadh for the offer.

Finally, here is why it is quite obvious that China has stepped up:

Iran said the cut will have no impact on its crude sales, warning that any sanctions on its oil will raise international crude prices.

Brent crude oil prices were up $1 a barrel to $118.35 shortly after Iran’s state media announced last week that Tehran had cut oil exports to six European states. The report was denied shortly afterwards by Iranian officials.

“We have our own customers … The replacements for these companies have been considered by Iran,” Nikzad said.

Surely, when it comes to shooting itself in the foot, Europe truly has no equal.