Maybe these guys just know who their real elite masters are …

… and who they are really working for!

I hope they know this too:

“(Soldiers are) dumb, stupid animals to be used as pawns for foreign policy.”
(as quoted in Woodward and Bernstein’s “The Final Days”, ch. 14)
– Henry Kissinger

A US Marine sniper team posed with a flag emblazoned with the symbol of the Nazi SS while on duty in Afghanistan, the Pentagon has admitted. 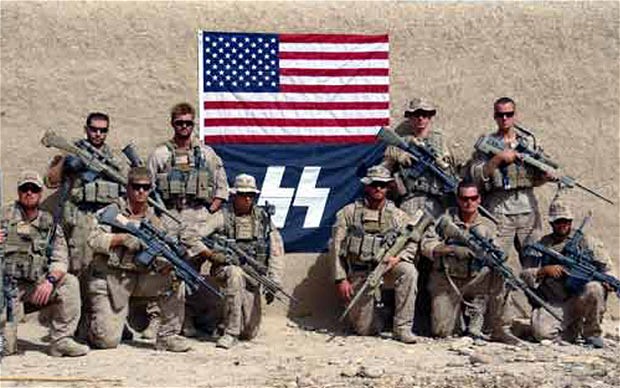 A photograph leaked onto the internet showed the heavily-armed troops crouching in front of the banner as it hung below the American flag.

The lightning symbol, once worn by the unit tasked with the extermination of Europe’s Jews, sparked immediate outrage and put the Marines back on the defensive just weeks after an online video showed troops from a different unit urinating on the bodies of dead Taliban fighters.

The photograph was reportedly taken in September 2010 by members of 1st Reconnaissance Battalion at a base in the Sangin district of Helmand province.

It was brought to the attention of the 1 Marine Expeditionary Force’s Inspector General in November of last year and the troops were immediately ordered to stop using the symbol.

The Pentagon refused to say whether the Marines involved had been disciplined, saying it was matter for commanders at their base in Camp Pendleton, California.

While the battalion has been redeployed to Afghanistan, none of the soldiers in the photograph are still serving with it.

A second picture, reportedly taken before 2004, showed a marine sniper with an SS symbol carved into the side of the his rifle.

A spokeswoman said the icon had been used by the troops to identify themselves as scout snipers, a designation unique to the Marine Corps, and was never intended to have Nazi connotations.

In a statement the Corps said: “Certainly, the use of the ‘SS runes’ is not acceptable and scout snipers have been addressed concerning this issue. ‘SS runes’ are prohibited from use as a symbol or any other use.”

“Rest assured, the Marine Corps does not allow the use of ‘SS runes’.”

The SS or Schutzstaffel originated as a personal bodyguard to Adolf Hitler but rose to become one of the most feared organisations in the Third Reich. Under the leadership of Heinrich Himmler, the unit acted as the supreme enforcer of loyalty to the regime and manned the concentration camps. 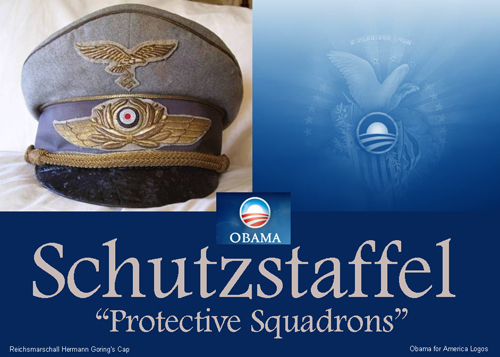 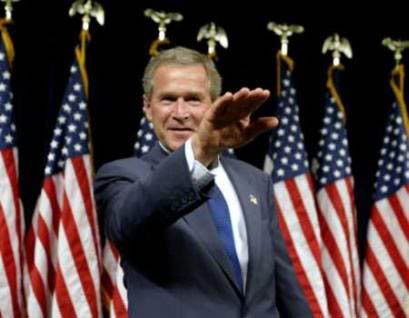 Since Obama signed the NDAA into law the US is officially a fascist military police state: