And opinions like this one from economist Dennis Gartman …

– The Irrelevance Of The Baltic Freight Index

(Dec. 13, 2011): Business Week — Gold is in the “beginnings of a real bear market,” economist Dennis Gartman said today in his daily Gartman Letter.

Dennis Gartman, economist and newsletter writer, said he is buying more gold priced in euros after he “returned to this trade” last week. It is “time to add to the trade and we are doing so this morning,” he said today in his daily Gartman Letter.

Gold and silver (‘usually’) bottom out around (‘directly after’) Christmas.

The sheeple buy iPads and iPhones and we buy gold and silver! 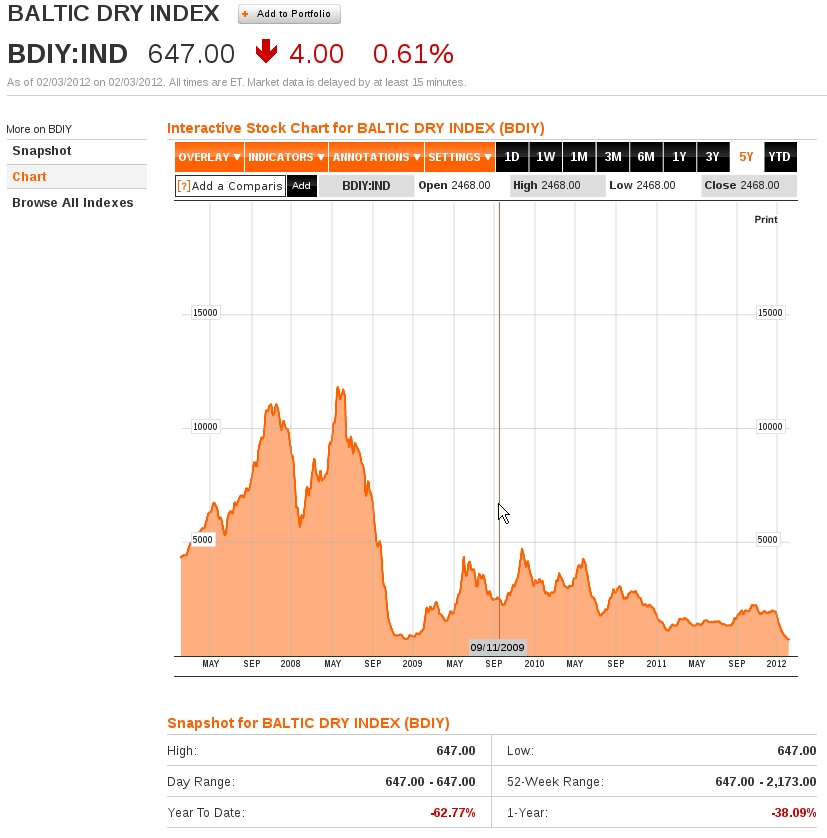 Times are tough for the shipping market.

Freight rates hit a record low Wednesday on weak demand for iron ore, poor weather conditions in mining regions and a glut of shipping capacity. The Baltic Dry Index, a composite of commodity shipping costs around the world, fell for a 32nd consecutive session to 662. The previous low, of 663, came in December 2008, during the depths of the credit crunch.

But unlike three years ago, this slump reflects more than a sluggish global economy. A conflation of seasonal, environmental and demand-side factors has accelerated the index’s decline in recent months and could tip it further into the red. The index has plunged 59% this year alone and is down 94% from the peak hit just before the crisis hit.

More than anything, this collapse “is due to excessive supply of ships and shipping capacity,” said Beethowen Nepomuceno, who is responsible for ocean transport at commodities trading giant Cargill’s São Paulo’s office.

Analysts and industry players expect the glut in shipping capacity to last for several years given that vessels often operate for around 25 years. But increased scrapping and the possibility that unprofitable shipping firms could be forced out of business should eventually lend some stability to prices, they say.

“If old ships exit, that could start to correct the market,” said Mr Nepomuceno. “It’s an eternal game of push and shove.”

A big factor depressing rates is the delivery of vessels ordered when the global economy was booming in the early-to-mid-2000s and credit was freely flowing, said Mark Williams, research manager at global shipbroking firm Braemar Seascope.

“Companies saw China as a never-ending story and wanted to invest their profits in new shipping capacity,” he said.

Now those vessels are being delivered, yet the need for all of them is no longer as obvious. The order book currently stretches to 2015, according to industry analysts, with the majority of vessels due for delivery this year.

Other, more recent factors have aggravated the situation.

Unusually heavy rains in Brazil prompted mining giant Vale, which produces around 25% of the world’s iron ore, to invoke a clause known as “force majeure” on Jan. 11 in some contracts to free itself from penalties on delayed shipments of ore, which is primarily used to make steel. That was lifted on Jan. 23, and mining and transportation resumed.

In addition, demand for iron ore in China, which consumes more than half of the world’s iron-ore output, has been waning in recent months; inventories at Chinese ports are near record levels.

China’s crude-steel output grew 8.9% in 2011 to 695.5 million metric tons, but growth should slow to 5% this year as Beijing’s efforts to cool the economy continue to bite, according to market estimates compiled by London-based The Steel Index. In addition, the Lunar New Year holiday, which essentially shut down the country for a week in January, was a temporary brake on demand.

“The shipping market has been hit by a triple whammy of bad weather, weaker Chinese iron-ore demand and public holidays,” Mr. Williams of Braemar Seascope said.

A longer-lasting source of pressure is Vale’s order for a fleet of 35 so-called ‘Valemax’ vessels that can carry 400,000 deadweight tons, making them more than twice as large as Capesizes, the next-largest carrier, which typically carry up to 180,000 deadweight tons.

The super-sized ships will be used on the company’s Brazil-Asia route in order to compete more efficiently with nearer Australia shippers. Vale docked the first of the fleet, the Berge Everest, at China’s Port of Dalian in late December, with a delivery of 350,000 tons of iron ore.

China’s shipping industry has lobbied against such ships, fearing they may strengthen Vale’s dominance on the dry bulk market and China’s Ministry of Transport has restricted access of the vessels into its ports.

“The vessels have been built, so the tonnage will be there,” said an analyst at a shipping firm who declined to be named. “It’s going to be a tough couple of years for the shipping market.”