Ok, I totally changed the title. But destroying the middle class and the poor is the plan of the power elite on their one-way road to their fascist New World Order.

Ok, I exaggerate. But that’s my cynical first impression after finding the following diagram in the briefing book for the gathering of the good and the great at the World Economic Forum in Davos, Switzerland. (Click for a larger size.) 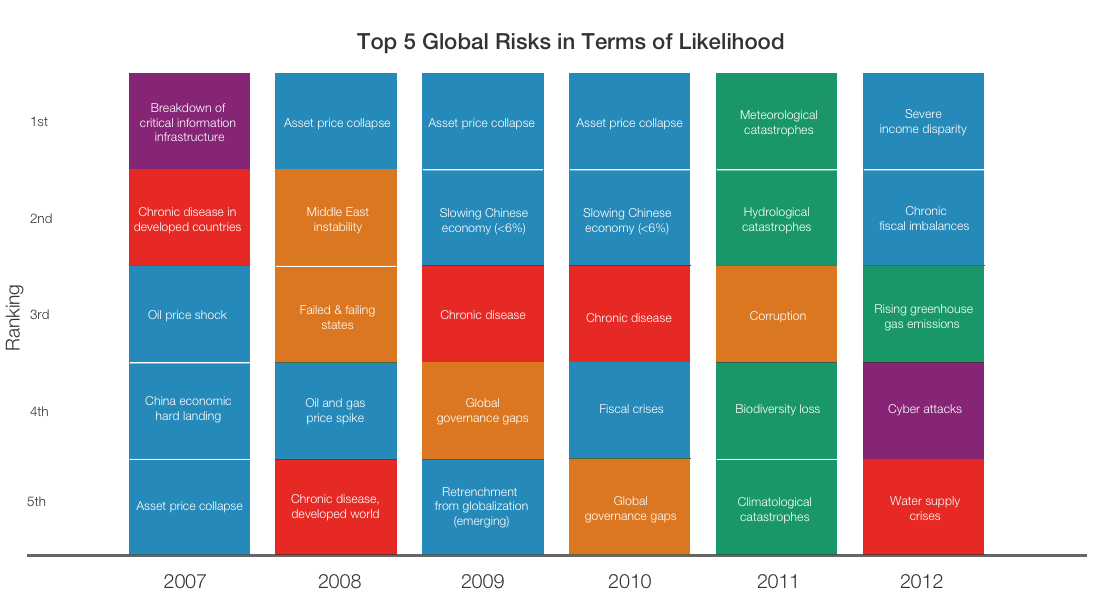 As you can see “Severe income disparity” is #1 on the Top 5 risks list this year, after having failed to make the short list for the preceding 5 years.

Now it’s not as though the attendees of Davos were completely inattentive to the economic plight of the less fortunate all this time. “Economic disparities” was on last year’s laundry list of risks and was featured prominently in the executive summary of 2011’s report. But the urgency has been ratcheted up quite a bit this year: note the new modifier “severe” and the use of the more specific “income” rather than “economic”. But wait, there’s more.

the benefits of globalization seem unevenly spread – a minority is seen to have harvested a disproportionate amount of the fruits. Although growth of the new champions is rebalancing economic power between countries, there is evidence that economic disparity within countries is growing.

Dystopia, the opposite of a utopia, describes a place where life is full of hardship and devoid of hope. Analysis of linkages across various global risks reveals a constellation of fiscal, demographic and societal risks signalling a dystopian future for much of humanity. The interplay among these risks could result in a world where a large youth population contends with chronic, high levels of unemployment, while concurrently, the largest population of retirees in history becomes dependent upon already heavily indebted governments. Both young and old could face an income gap, as well as a skills gap so wide as to threaten social and political stability.

They actually used the “D” word. Remember, this is not the research paper of some grad student with a flair for the dramatic. This document was written in part by Swiss Re and Zurich Financial Services — two of the most solid P&C insurers and re-insurers in the world. Their only business is the identification and management of real world risk. When you start hearing the language of Huxley and Orwell on the slopes of the Swiss Alps, then you’d best believe that something fundamental has shifted and that a lot of the rich and powerful are more frightened than they used to be.