Bankrupting America, destroying the US dollar and turning the US into a Third World country.

Prepare for the greatest financial collapse in world history.

Update: the Senate has failed to reject a bid to stop the debt ceiling hike with a simple 52 vote majority all of it along party lines. The US now has $16.4 trillion in debt capacity as of Friday. Since roughly $100 billion was plundered from Pension Funds in the past month, The US will have about $15.4 trillion in debt with the Monday DTS. The question then is how long will the $1 trillion in debt capacity last: at $125 billion/month it won’t be enough to carry the US past the election without another massive debt ceiling spectacle.

While Congress recently voted down the increase in the US debt ceiling, that vote was largely irrelevant. And all that matters is how the Senate will vote. Watch it live in progress below. It is virtually unlikely that the process of debt ceiling increase will be overturned so within minutes the US should have a brand spaking new debt ceiling of $16.4 trillion. 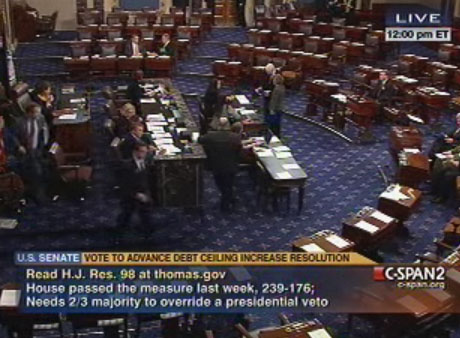