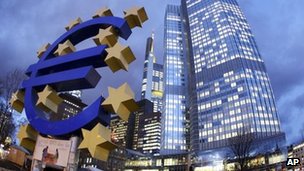 Investors are flocking to havens to store their cash, amid continuing worries about the eurozone debt crisis.

That means investors are effectively willing to pay Germany for the privilege of lending to it.

Meanwhile the European Central Bank revealed a new record for the amount of cash lodged with it overnight by banks.

Traders said they could hit half a trillion euros by next week.

High deposits can indicate banks prefer the safety of the central bank for their funds to the higher rates they could get by lending to each other.

And the ECB said on Monday that it more than doubled its weekly purchases of eurozone bonds.

The ECB said it bought 1.1bn euros in bonds last week, up from 462m euros in the previous week, as part of a programme to drive down the borrowing costs of some eurozone members.

As usual, the ECB did not specify which government bonds it had bought.

At the German debt auction, Bundesbank data showed that it drew bids for 1.8 times the amount on offer, compared with 3.8 times at the previous auction in December.