Iran has threatened to block the Strait of Hormuz, which served as the conduit for 17 millions barrels of oil every day last year.

We are already at war with Iran. We started it.

The sanctions against Iran are an act of war and Iran has the right to defend itself.

Imagine what would happen next? Yeah, right!

– BREAKING NEWS: The Pentagon to Send US Troops to Israel. Iran is the Unspoken Target

Here is the solution: 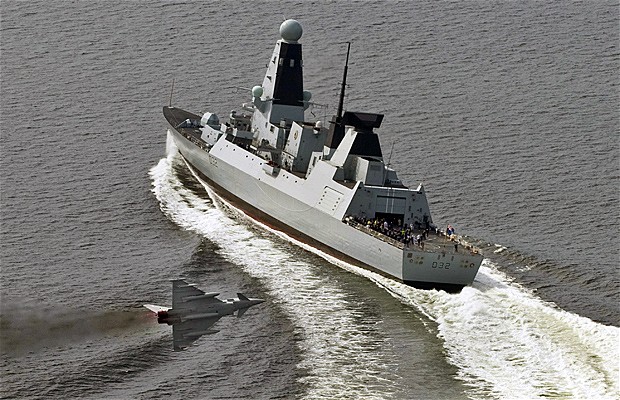 – Royal Navy sends its mightiest ship to take on the Iranian show of force in the Gulf (Telegraph, Jan. 6, 2012):

The Royal Navy’s most formidable warship is being sent to the Gulf for its first mission as tensions rise in the strategically vital region, it can be disclosed.

Iran has threatened to block the Strait of Hormuz, which served as the conduit for 17 millions barrels of oil every day last year.

Naval commanders believe the deployment of HMS Daring, a Type 45 destroyer, will send a significant message to the Iranians because of the firepower and world-beating technology carried by the warship.

Philip Hammond, the Defence Secretary, has publicly warned Iran that any blockade of the Strait of Hormuz would be “illegal and unsuccessful”.

The Daily Telegraph understands that HMS Daring has been fitted with new technology that will give it the ability to shoot down any missile in Iran’s armoury. The £1 billion destroyer, which will leave Portsmouth next Wednesday, also carries the world’s most sophisticated naval radar, capable of tracking multiple incoming threats from missiles to fighter jets.

Daring, with its crew of 190, will transit through the Suez Canal and enter the Gulf later this month to replace the Type 23 frigate currently on station.

Iran completed a 10-day naval exercise in the sensitive waters near the Strait of Hormuz on Tuesday, staging manouevres which included firing three anti-ship missiles understood to be the Chinese-made C-802.

Yesterday, Tehran said that another exercise would be held in the same area next month. Admiral Ali Fadavi, commander of the naval branch of the Revolutionary Guard, warned that this would be “different” from the most recent one.

Speaking earlier, Mr Hammond said that “our joint naval presence in the Arabian Gulf” was “key to keeping the Strait of Hormuz open for international trade”.

A Navy source has indicated that more British ships could be sent to the Gulf if required. The second Type 45, HMS Dauntless, will also be available to sail at short notice.

During an intensive “swarm attack”, the vessel could simultaneously track, engage and destroy more targets than five of it predecessor Type 42 destoyers.

The Sea Viper is also one of the world’s most agile missiles equipped with its own radar that can allow it to hit a target a hundred miles away.

Lord West, the former First Sea Lord, described Daring as a “world beater”, adding: “This warship has an unbelievably capable ability to track targets, spot the most dangerous and identify them for its missiles to take out. It’s highly, highly capable. I would like to see the Type 45s show their potential in the region.”

The 8,000 ton destroyer will carry 48 Sea Vipers that can also be used to shoot down fighters as well as sea skimming missiles. It will also carry a Lynx helicopter capable of carrying Sea Skua anti-ship missiles and is capable of embarking 60 special forces troops.

An MoD spokesman said: “While the newly operational Type 45 destroyer HMS Daring is more capable than earlier ships, her deployment East of Suez has been long planned, is entirely routine and replaces a frigate on station.”

Any attack on Iran is the beginning of WORLD WAR III: