We are already at war with Iran!

Iran escalated its war of words with the United States on Tuesday with a warning to Navy ships to stay out of the strategic Strait of Hormuz, remarks that rattled commodities markets and helped send oil prices soaring.

Iran has test-fired a surface-to-surface cruise missile in a naval drill, after the country threatened to close the strategic Strait of Hormuz, the passageway for 40 per cent of the world’s oil supply, if sanctions were imposed on its crude exports.

Brent crude spot prices rise from $107 to $111 after Tehran threatens US aircraft carrier over use of crucial shipping route.

As if the situation in the Gulf was not enough on edge, here comes Europe with news, via Reuters, that EU governments have reached a deal to ban Iranian oil imports. The only thing pending is the determination of the starting date and other details. The result, as expected, is another leg up in crude. Sooner or later, this relentless rise higher will spill through to the pump, which according to the Michigan Bizarro confidence indicator will sent consumer optimism to historic levels. And now, the escalation hot grenade is back in Iran’s court. Expect more missiles to be fired into the water and more rhetoric about Straits of Hormuz closure in 5…4…3…

European Union governments have reached a preliminary agreement to ban imports of Iranian crude to the EU but have yet to decide when such an embargo would be put in place, EU diplomats said on Wednesday.

Diplomats said that EU envoys held talks on the issue in the last days of December and that any objections to the idea, notably from Greece, were dropped.

“A lot of progress has been made,” one EU diplomat said, speaking on condition of anonymity. “The principle of an oil embargo is agreed. It is not being debated anymore.” 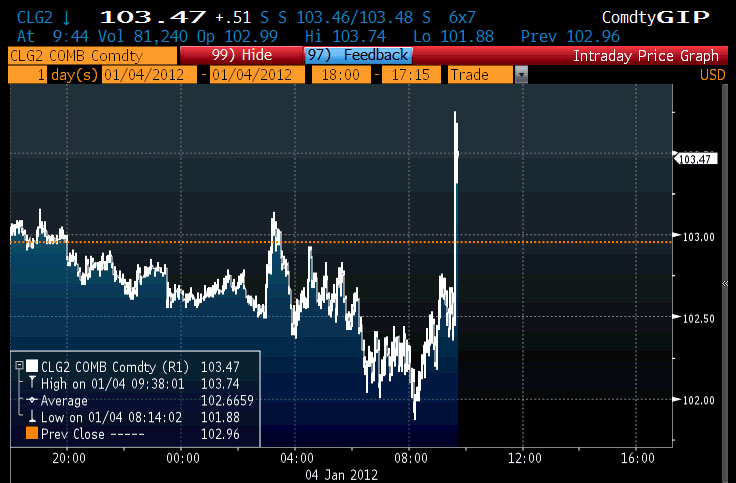