It was just a little footnote to the LTRO announcement. Just a little statement that 40 billion of the collateral received by the ECB was newly issued, newly guaranteed Italian debt. The more I think about it, the more uncomfortable I get.

So while approving some new austerity measures that are unlikely to work, the government added 40 billion of contingent liabilities. The rating agencies can’t be happy about that. Investors shouldn’t be happy with that. Rather than being a new source of funds for Italian debt (the most optimistic view of LTRO) it created new debt!  It is adding to Italy’s debt problem.

And I can’t even figure out why they did this. Didn’t banks have other eligible collateral? Have they already pledged anything decent they own to the ECB or private lenders to get funds? Given the size of the balance sheets that is unbelievable but yet there is no explanation of why they didn’t have more ‘normal’ assets to pledge.

Is this just a ploy to inextricably link the Italian banks to the government. The banks could have borrowed direct from the ECB. Bizarrely enough they may have even been able to post their own non government guaranteed debt directly but that was too obviously Enronesque?

Everything about this deal makes me squirm. The LTRO seemed like a decent idea to me.  It wasn’t solving anything and was unlikely to help create new sovereign debt demand, but it would relieve funding pressure on banks. For the most part that is probably how it is being used, but this ploy by the Italians feels all wrong. It feels like a dirty game and scares me that I can’t figure out the angle behind the dirty game. Creating such a large new contingent liability for Italy seems both unnecessary and downright stupid. How will the market gain confidence in Italy and buy their debt when you don’t know how much debt is outstanding.  These banks aren’t in great shape, so the guarantees could be called on.

I think the market will grow more negative on Italy as it digests what it has done and loses faith in the technocrats.  If Italian debt slides again it will drag the market down.  This little “scam” was ill advised in my opinion and sadly is the sort of thing a technocrat may actually believe in. They are fans of form over substance and tend to thing of credit in vague and unrealistic ways. They like to pretend guarantees aren’t real.  They view short dated risk as, ummm, un risky – which may explain the 3 month term. 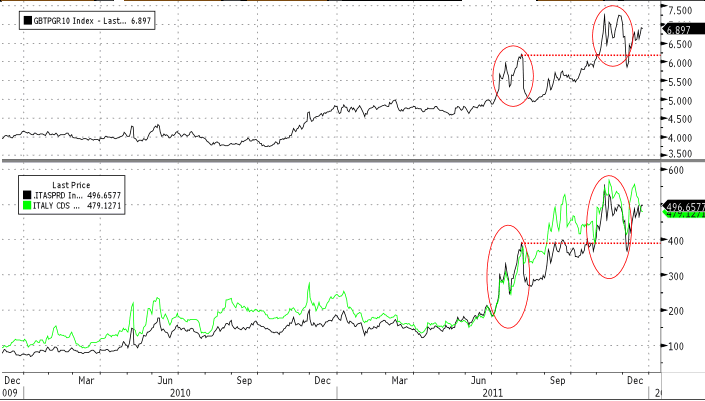 I am scared that as these contingent liabilities hit the spotlight we will find that the sovereign debt problem is far far bigger than we have realized.