‘Mr Schäuble has now been forced to give a categorical assurance that the EFSF will not be expanded. He cannot break his word without very serious consequences, or before the financial crisis turns deadly.’

I bet Mr. Schäuble lied (again), but here is why the plan to save the eurozone is doomed to fail:

In December 2009 Schäuble said that the Germans cannot pay for the problems of Greece.

In April 2010 he said that Greece may not need a bailout.

In May 2010 he promised his people the € 110 Billion bailout to be a one-time grant and the absolute upper limit of payments.

In June 2011 Greece got another € 100 Billion bailout, again with approval from Mr. Schäuble.

Finance minister Wolfgang Schäuble is not only a LIAR, but a TRAITOR unto his people.

The elite puppet governments in Europe and in the US do exactly what they are told by their masters.

This is the greatest looting of the people in world history orchestrated by the elitists.

Europe is already burning (and so is the US).

Prepare for currency reform(s) and the greatest financial collapse in world history.

Got physical gold and silver (…and food and water supplies)?

The Dangerous Subversion Of Germany’s Democracy 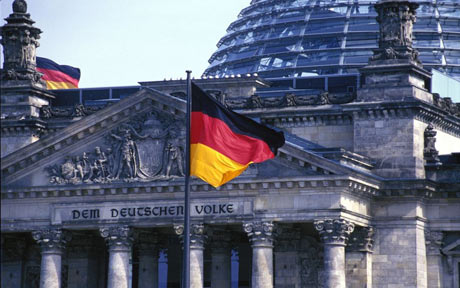 The Bundestag and the German people are being undermined

Optimism over Europe’s “grand plan” to shore up EMU was widely said to be the cause of yesterday’s torrid rally on global markets, lifting the CAC, DAX, Dow, crude and copper altogether.

This is interesting, since Germany’s finance minister Wolfgang Schäuble has given an iron-clad assurance to the Bundestag that no such plan exists and that Germany will not support any attempt to “leverage” the EU’s €440bn bail-out plan to €2 trillion, or any other sum.

“I don’t understand how anyone in the European Commission can have such a stupid idea. The result would be to endanger the AAA sovereign debt ratings of other member states. It makes no sense.”

All of this was out in the open and widely reported. Markets appear to be acting on the firm belief that he is lying to lawmakers, that there is indeed a secret plan, that it will be implemented once the inconvenience of the Bundestag’s vote on the EFSF tomorrow is safely out of the way, and that German democracy is being cynically subverted.

The markets may or may not right about this. Mr Schäuble has a habit of promising one thing in Brussels and stating another in Berlin.

But it is surely an unhealthy state of affairs. One of the happiest achievements of the post-War era is the emergence of a free, flourishing, and democratic Germany under the rule of law.

Carsten Schneider, finance spokesman for the Social Democrats, spoke for many last week, denouncing the shabby back-room dealings as a scandal. “A new multi-trillion programme is being cooked up in Washington and Brussels, while the wool is being pulled over the eyes of Bundestag and German public. This is unacceptable.”

Mr Schäuble has now been forced to give a categorical assurance that the EFSF will not be expanded. He cannot break his word without very serious consequences, or before the financial crisis turns deadly.

We have reached the point where the unseemly scramble to find ever more inventive and extreme ways to save monetary union – yet without coming clean, and invariably by trying to deceive German citizens about the real implications of each deal – is clashing directly with the integrity of German democracy.

Andreas Vosskuhle, head of the constitutional court or Verfassungsgericht, specifically warned this week that Germany is entering treacherous waters.

He said that the improvisation of far-reaching policies to shore up EMU had become “dangerous”, and warned against schemes to circumvent the rule of law with backroom deals. “Germany has a great affinity for the rule of law. People expect the political class to obey the rules.”

“There is little leeway left for giving up core powers to the EU. If one wants to go beyond this limit – which might be politically legitimate and desirable – then Germany must give itself a new constitution. A referendum would be necessary. This cannot be done without the people,” he told the Frankfurter Allgemeine.

Dr Vosskuhle reminded politicians that they do not have the legal authority to sign away German constitutional prerogatives.

“The sovereignty of the German state is inviolate and anchored in perpetuity by basic law. It may not be abandoned by the legislature (even with its powers to amend the constitution),” he said.

He repeated that the Court had set clear boundaries to EU bail-outs in a ruling earlier this month. “Our judgment makes clear that the Bundestag cannot abdicate its fiscal responsibilities to other actors. And no permanent mechanism may be created that entails taking over the liabilities of other states,” he said.

Otmar Issing, the ECB’s founding guru, has gone even further in recent weeks, warning that the current course must ultimately provoke the “resistance of the people” and perhaps civil wars.

Dr Issing is not a German nationalist. He is open to the idea of an authentic union with a “European government controlled by a European Parliament” on democratic principles.

What he opposes is the deformed halfway house that is now Europe, where supra-national bodies – accountable to no elected body and taking decisions behind closed doors – are usurping legislative primacy over tax and spending. As he reminds us, it was monarchical assault on the power of the purse that led to England’s Civil War, and America’s Revolution.