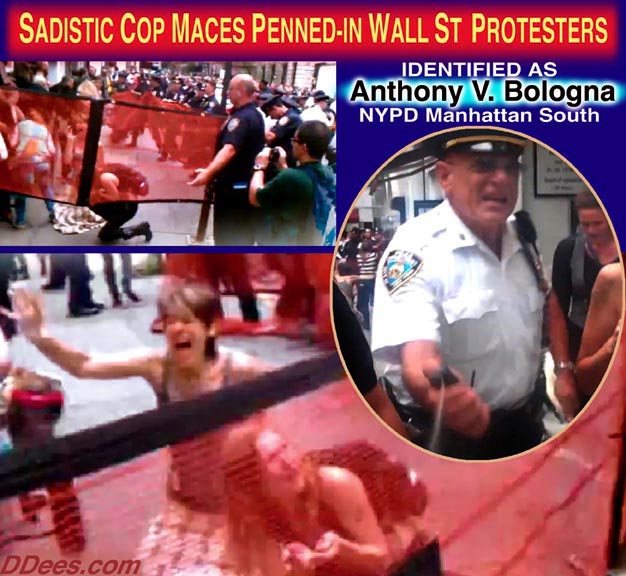 (Update below.) Unless there is something faked about this video, which is on the New York Times’ City Room site and is based on annotation and slow-mo apparently from USLaw.com, a uniformed New York City police officer abused power in a way that was cruel and cowardly during yesterday’s Wall Street protests. It’s worth the time to watch.

He walks up; unprovoked he shoots Mace or pepper spray straight into the eyes of women held inside a police enclosure; he turns and walks away quickly (as they scream, wail, and fall to the ground clawing at their eyes) in a way familiar from hitmen in crime movies; and he discreetly reholsters his spray can.

You may have already seen this. If you haven’t, it is worth knowing about. If this is what it looks like, it is outrageous. The mayor and others should say something. And this man can certainly be identified.
____
Update: according to the NYT, the chief police spokesman, Paul Browne, said that the policeman used pepper spray “appropriately.” Great. On the video we can’t hear what either side is saying. But at face value, the casualness of the officer who saunters over, sprays right in the women’s eyes, and then slinks away without a backward glance, as if he’d just put down an animal, does not match my sense of “appropriate” behavior by officers of the law in a free society.

Police officers make countless hard decisions every day, often at the risk of their own safety or lives. It’s a harder job than I have. But everything about this scene suggests an officer who has forgotten about some of these hard choices. He just zaps ’em and walks away as they scream.