We’re continuing to monitor Yahoo’s mail service and have now been able to send messages containing the phrase “Occupy Wall Street” and its website on some Yahoo accounts. On other accounts, however, Yahoo is still blocking the messages.

“We apologize 4 blocking ‘occupywallst.org’ It was not intentional & caught by our spam filters. It is resolved, but may be a residual delay.”

“Thanks to @YahooMail users & @ThinkProgress for catching problem w/ #Occupywallst.org mail. Prob is fixed, but there may be residual delays.” 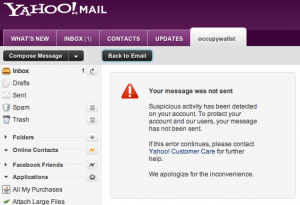 Yahoo blocks users from sending e-mails about the OccupyWallSt.org website with a message claiming “suspicious activity”

Thinking about e-mailing your friends and neighbors about the protests against Wall Street happening right now? If you have a Yahoo e-mail account, think again. ThinkProgress has reviewed claims that Yahoo is censoring e-mails relating to the protest and found that after several attempts on multiple accounts, we too were prevented from sending messages about the “Occupy Wall Street” demonstrations.

Over the weekend, thousands gathered for a “Tahrir Square”-style protest of Wall Street’s domination of American politics. The protesters, organized online and by organizations like Adbusters, have called their effort “Occupy Wall Street” and have set up the website: www.OccupyWallSt.org. However, several YouTube users posted videos of themselves trying to email a message inviting their friends to visit the Occupy Wall St campaign website, only to be blocked repeatedly by Yahoo. View a video of ThinkProgress making the attempt with the same blocked message experienced by others (click full screen for a better view of the text):

ThinkProgress tried other protest websites, like AmericansforProsperity.org and TeaPartyPatriots.org, and both messages were sent smoothly. However, emails relating to the OccupyWallSt.org protest were blocked with the following message (emphasis added):

Your message was not sent
Suspicious activity has been detected on your account. To protect your account and our users, your message has not been sent.
If this error continues, please contact Yahoo! Customer Care for further help.
We apologize for the inconvenience.

ThinkProgress has sent a request for more information to Yahoo, and will post any reply once we have received it with Yahoo’s explanation for its apparent censorship.

It’s not the first time Yahoo has been accused of political censorship. Yahoo officially partners with the repressive Chinese regime to provide the government with access to emails related to groups viewed as dissidents. An explosive investigation by Der Spiegel found that Yahoo provided Chinese authorities with access to emails from journalists, and the snooping resulted in the same journalists being sent to prison camps.

The Occupy Wall Street protests have continued, but if you own a Yahoo e-mail account, you might not know about it.