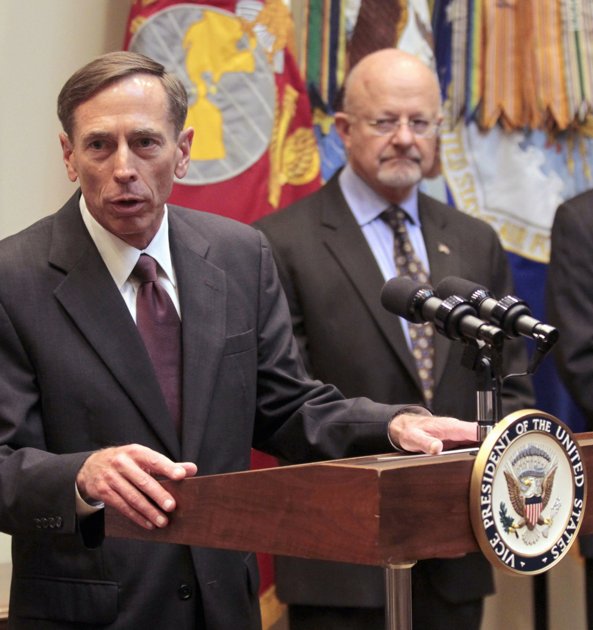 In this Sept. 6, 2011 file photo CIA Director David Petraeus, accompanied by Director of National Intelligence James Clapper, speaks in the Roosevelt Room of the White House in Washington. The CIA said Tuesday it is investigating whether the agency broke the law by helping the New York Police Department build intelligence-gathering programs that monitored life in Muslim communities. (AP)

WASHINGTON (AP) — The CIA inspector general is investigating whether the agency broke the law by helping the New York Police Department build intelligence-gathering programs that monitored life in Muslim communities, the agency said Tuesday following an investigation by The Associated Press. Separately, the U.S. government’s top intelligence official conceded that it looked bad for the CIA to be working with city police departments.

“It’s my own personal view that that’s not a good optic, to have CIA involved in any city-level police department,” said James Clapper, the U.S. director of national intelligence. “But I think CIA is going to address that.”

The agency’s unprecedented cooperation with the NYPD was a subject of an eight-month investigative reporting project by The Associated Press. The AP found that NYPD intelligence officers analyzed hundreds of mosques and student organizations, infiltrating dozens of them. Undercover officers eavesdropped in cafes and restaurants and wrote daily reports about what they overheard. The department also maintained a list of 28 countries that, along with “American Black Muslim,” the department labeled “ancestries of interest.”

A CIA officer, Lawrence Sanchez, helped create and guide these programs. From 2002 to 2004, when these programs were being built, Sanchez was on the CIA payroll and maintained an office at both the NYPD and the CIA’s offices in New York. The programs have continued with at least the tacit support of President Barack Obama, whose administration has repeatedly sidestepped questions about them.

The NYPD also sent a detective on a temporary assignment to the CIA, where he completed the agency’s 17-week foreign espionage course. After that rare training, he then returned to New York to supervise intelligence investigations.

It’s unclear to what extent Mayor Michael Bloomberg oversaw these programs and he has repeatedly refused to answer questions about them. On Tuesday, he again referred questions to the NYPD, which said it welcomed the CIA’s investigation.

During a rare joint intelligence oversight hearing on Capitol Hill, Rep. Jan Schakowsky, D-Ill., asked Clapper about the government’s use of enhanced interrogation techniques, electronic surveillance of some U.S. citizens and the AP’s reporting about CIA and New York police working together closely. “Do you believe that domestic activity by federal intelligence agencies, particularly the CIA, has crossed the line?” she asked.

Clapper said some of what Schakowsky cited was done in response to the attacks on the World Trade Center and Pentagon.

“Some things that were done right after, in the immediate aftermath of 9/11 — and I think that in itself is a very important factoid to remember,” he said. “What was the atmosphere and the conditions then that led to certain of these actions?”

Clapper did not describe exactly how he expects the CIA will respond to the concerns he expressed about perceptions of the spy agency’s work with New York police, and members of Congress did not press him on the subject.

The CIA’s new director, David Petraeus, told lawmakers that the agency’s inspector general began investigating the CIA-NYPD nexus at the request of acting director Michael Morell, before Petraeus took office just over one week ago.

Petraeus, testifying for the first time as CIA director, said he would follow up on the investigation “and just ensure that we are doing the right thing.”

The CIA is prohibited from domestic spying. The NYPD, the CIA and Obama’s counterterrorism advisor, John Brennan, have said the relationship never crossed that line and said Americans expected such collaboration after the Sept. 11, 2001, terrorist attacks.

Much of the NYPD’s intelligence-gathering was conducted by a secret team called the Demographics Unit, which used plainclothes officers to help map and monitor ethnic communities in New York, New Jersey and Connecticut. The NYPD has denied that unit ever existed, despite documents and interviews showing otherwise.

Sanchez took a leave of absence from the CIA in 2004 to become a senior official in the NYPD Intelligence Division. But some in the CIA raised questions about the relationship, forcing him to choose in 2007 whether to remain with the CIA or the NYPD. He left the NYPD last year.

After he left, the CIA dispatched one of its most senior clandestine officers to the NYPD, where he serves as a special assistant to intelligence chief David Cohen, himself a retired senior CIA officer. The officer, whom the AP is not identifying because he remains undercover, twice served as station chief in the Middle East and has run a major division at CIA headquarters.

Clapper described him on Capitol Hill as an analyst, but his office later said he misspoke and recognized the officer’s career in the clandestine service.

Officials have described the posting as a sabbatical, a chance for him to learn the management of other departments. They have said he is not operating in the same role as Sanchez.

Civil rights groups have urged the Justice Department to investigate the NYPD for what it said was racial profiling. The New York Civil Liberties Union applauded the CIA investigation but it called for a parallel investigation into the NYPD saying, “The NYPD should not be engaged in warrantless surveillance or racial or religious profiling.”

The Justice Department has said it is reviewing the matter. Under Attorney General Eric Holder, the department has stepped up enforcement of civil rights violations by police departments, but none of those cases involves national security investigations like the ones being conducted by the NYPD.

Also Tuesday, Rep. Rush Holt, D-N.J., called on the Justice Department to investigate. Holt, who previously served on the Intelligence Committee, said he doesn’t remember being told about these programs or about the CIA’s involvement.

“I think this is pretty troubling,” he said. “It sounds to me like profiling.”