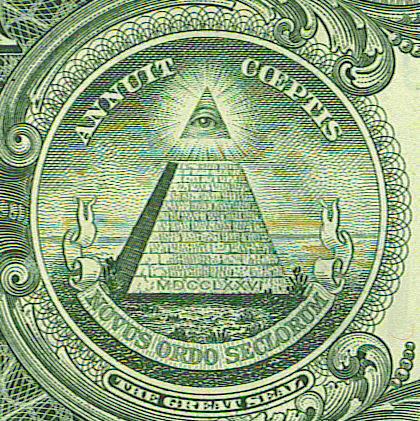 The national debt system of The New World Order

The United States and other countries of the world are becoming more fascist as New World Order globalists rush to complete their fascist world government by late 2012.  According to Italy’s former fascist dictator and MI5 asset, Benito Mussolini, “fascism should rightly be called corporatism, as it is the merger of corporate and government power.”  The following examples demonstrate fascism/corporatism within the banking structure of the United States.

JP Morgan and Bank of America

JP Morgan is the largest processor of food stamp benefits in the United States.  JP Morgan has contracted to provide food stamp debit cards in 26 U.S. states and the District of Columbia.  JP Morgan is paid for each case that it handles, so that means that the more Americans that go on food stamps, the more profits JP Morgan makes.

Currently, approximately 44.2 million Americans (1 in 7) are receiving food stamps, which means JP Morgan will continue to reap great profits in addition to their regular derivatives and fractional reserve banking scams.

Not to be left out, Bank of America and Visa struck a deal with the State of California:

Of course, using the fascist debit card is subject to bank fees.  Therefore, rather than issuing checks directly to recipients, California chose a debit card system that will guarantee fees and profits paid to B of A and Visa.

The Federal Reserve
The Federal Reserve banking system is privately owned.  Its shareholders are private banks.  It creates money out of nothing and loans it to the government with interest, thereby transforming citizens into collective debt slaves called “taxpayers.”  The Federal Reserve is not held accountable by Congress, which is supposed to have the power of the purse, and openly admits such.
The Federal Reserve Act was written in secret during 1910 on Jeykll Island by the following banksters and their minions:
1. Nelson W. Aldrich, Republican “whip” in the Senate, Chairman of the National Monetary Commission, business associate of J.P. Morgan, father-in-law to John D. Rockefeller, Jr.;
2. Abraham Piatt Andrew, Assistant Secretary of the United States Treasury;
3. Frank A. Vanderlip, president of the National City Bank of New York, the most powerful of the banks at that time, representing William Rockefeller and the international investment banking house of Kuhn, Loeb & Company;
4. Henry P. Davison, senior partner of the J.P Morgan Company;
5. Charles D. Norton, president of J.P. Morgan’s First National Bank of New York;
6. Benjamin Strong, head of J.P. Morgan’s Bankers Trust Company; and
7. Paul M. Warburg, a partner in Kuhn, Loeb & Company, a representative of the Rothschild banking dynasty in England and France, and brother to Max Warburg who was head of the Warburg banking consortium in Germany and the Netherlands.

Congress and President Woodrow Wilson committed treason in 1913 by passing the Federal Reserve Act, which meant that the U.S. government would now borrow money from private banks at interest.

Also in 1913, the Internal Revenue Service started to collect income taxes under the 16th Amendment, which for the most part is used to pay interest on the national debt to the private banks that own the Federal Reserve.

The Federal Reserve owners also profit by making favorable loans to the their private banks and allies:

Credit Suisse, Goldman Sachs and Royal Bank of Scotland each borrowed at least $US30 billion ($29 billion) in 2008 from a Federal Reserve emergency lending program whose details weren’t revealed to shareholders, members of Congress or the public…Units of 20 banks were required to bid at auctions for the cash. They paid interest rates as low as 0.01 per cent that December, when the Fed’s main lending facility charged 0.5 per cent.

In essence, such loans are “free money” to giant banks.  Even the least savvy investor could turn a profit if they were loaned billions of dollars at 0.01 percent interest.  Small banks and individuals need not apply for such “borrowing programs.”
Approval ratings are another indication that Congress and CFR/Bilderberg Obama clearly represent corporate/banking interests and not the will of the people.  Currently congress has 18 percent approval rating, while Obama’s is below fifty percent.
In conclusion, JP Morgan and Bank of America profit from government assistance programs. The Federal Reserve is a private bank that loans money to the government, thereby enslaving its citizens with the national debt.  These two examples of fascism in the United States banking structure form the basis for ushering in the New World Order.
Fortunately, we as a people can easily remove these fascist systems.  The largest banks must be boycotted and the Federal Reserve System abolished like previous and more open forms of slavery.

Ethan Jacobs is founder of Beachday Surfwear.  He holds a Juris Doctor and Bachelor of Arts degree in Political Science.  Ethan’s passion is researching and writing about important issues to defeat every form of tyranny over the mind of man.