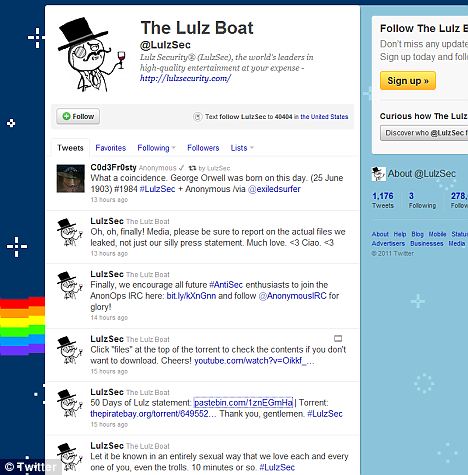 The group’s hacking has included attacks on law enforcement and releases of private data. It said unexpectedly on Saturday it was dissolving itself.

LulzSec, who are a splinter group of the more benign ‘Anonymous’ hacking ring, have themselves come under attack over the last few days with all six members outed by fellow hackers.

The group’s disbandment comes unexpectedly after days of mounting pressure from the FBI.

In an interview on Friday, a LulzSec member gave no indication that its work was ending.

In a typically quirky statement issued at midnight last night, the group said: ‘For the past 50 days we’ve been disrupting and exposing corporations, governments, often the general population itself, and quite possibly everything in between, just because we could.

‘It’s what we all crave, even the seemingly lifeless politicians and emotionless, middle-aged self-titled failures.

‘Even Hitler and Osama Bin Laden had these unique variations and style, and isn’t that interesting to know?

‘The mediocre painter turned supervillain liked cats more than we did.

‘Please don’t stop. Together, united, we can stomp down our common oppressors and imbue ourselves with the power and freedom we deserve.’

LulzSec claimed hacks on major entertainment companies, FBI partner organisations, the CIA, the US Senate and a pornography website.

In Britain, Ryan Cleary, 19, of South Beech Avenue, Wickford, Essex, was arrested at his family home on Monday as part of a Scotland Yard and FBI probe into LulzSec.

He is charged with conspiring with other people on or before June 20 to create a remotely controlled network of zombie computers, known as a ‘botnet’, to carry out distributed denial of service (DDoS) attacks, where websites are flooded with traffic to make them crash.

In an unusual strategy for a hacker group, LulzSec has used Twitter as a publicity platform while remaining anonymous.