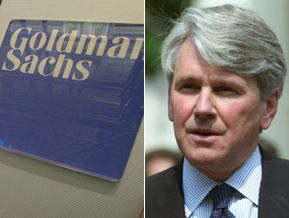 Craig served as White House counsel during the first year of Obama’s presidency, but is seen as having been pushed out for his role in advocating a strict timeline for the closing of the U.S. detention facility at Guantanamo Bay. His departure frustrated many liberal Obama supporters who saw Craig as a strong advocate for undoing some of what they saw as the worst excesses of the Bush era.

“It’s about advice and process,” the source said. “People will always leap to the conclusion that it’s about somebody’s Rolodex.”

Skadden declined to comment on Craig’s role with Goldman.

“A former White House employee cannot appear before any unit of the Executive Office of the President on behalf of any client for 2 years—one year under federal law and another year under the pledge pursuant to the January 2009 ethics E0,” said a White House official.

The official also said that the White House had no contact with the SEC on the Goldman Sachs case. “The SEC by law is an independent agency that does not coordinate with the White House any part of their enforcement actions.”

Whatever the reason for his hiring, Craig will presumably be a key player in the intricate counterattack Goldman Sachs officials in Washington and Manhattan improvised during the weekend — a plan that took clearer shape Monday as Britain and Germany announced that they might conduct their own investigations of the firm.

For three weeks, Goldman had planned to hold a conference call Tuesday to unveil its first-quarter earnings for shareholders. Shifting into campaign mode after the SEC’s surprise fraud filing, Goldman has moved the call up from 11 a.m. to 8 a.m. to try to get ahead of the day’s buzz. In an unusual addition, the firm’s chief counsel will be on the line to answer questions about the case, and Goldman is inviting policymakers and clients to listen to the earnings call themselves rather than rely on news reports.

Industry officials said the conference call — which will include, as originally planned, Chief Financial Officer David Viniar — will amount to a public unveiling of Goldman’s crisis strategy.

But the linchpin of that plan is already clear: An attempt to discredit the Securities and Exchange Commission by painting the case as tainted by politics because it was announced just as President Barack Obama was ramping up his push for financial regulatory reform, including a planned trip to New York on Thursday.

“The charges were brought in a manner calculated to achieve maximum impact at point of penetration,” a Goldman executive said.

Among the points Greg Palm, co-general counsel, plans to emphasize on the call is “how out of the ordinary the process was with the SEC,” the executive said. The SEC usually gives firms a chance to settle such charges before they are made public. Goldman executives say they had no such chance,and learned about the filing while watching CNBC.

With a monstrous problem and mammoth resources, the iconic firm is paying for advice from a huge array of outside consultants, including such top Washington advisers as Ken Duberstein and Jack Martin, founder of Public Strategies.

The basic plan: Make a tough, factual case without coming off as arrogant or combative and without souring the firm’s image even further.

Partly because of the firm’s belief that it has become an easy target, no Goldman officials have appeared on television since the SEC announced its case.

The firm thinks it can be more effective if others make its case. On CNBC’s “Squawk Box” on Monday, Andrew Ross Sorkin of The New York Times, who gets special attention from Goldman spinners, raised questions about the substance of the SEC’s case. Shortly thereafter, Sen. Judd Gregg of New Hampshire, the top Republican on the Senate Budget Committee, said he is “a little interested in the timing” of the case.

Reflecting a high-stakes balance for the unpopular investment bank, Goldman plans to stop short of a frontal attack. Instead, it is raising questions and feeding ammunition to allies.

“We don’t want to come across as being arrogant and above it all,” said a Goldman executive who insisted on anonymity. “The SEC is the major regulator of several of our businesses. Being at war with them is not the goal.”

Therefore, an official said, a key Goldman message in the days ahead will be, “We’re not against regulation. We’re for regulation. We partner with regulators.”

Goldman said its most important audience is its client base, from CEOs all over the world to pension-fund managers to entrepreneurs who use the firm’s private wealth-management services. The firm sent its staff two pages of talking points giving basic facts — and the official line — about the SEC case: “Goldman Sachs Lost Money on the Transaction … Objective Disclosure Was Provided.”

The official said clients have been sympathetic.

Other audiences include the news media and governments around the world, with Goldman reaching out Tuesday to politicians in Europe, Japan, the U.S. and everywhere in between.

Goldman pays extraordinary attention to its alumni network because so many of its former officials are in visible, powerful positions. An official said the firm tries “to empower them with information,” so that when they’re put on the spot about the Goldman case, they can say, “I’m not there, but let me tell you a few things I’ve been told.”