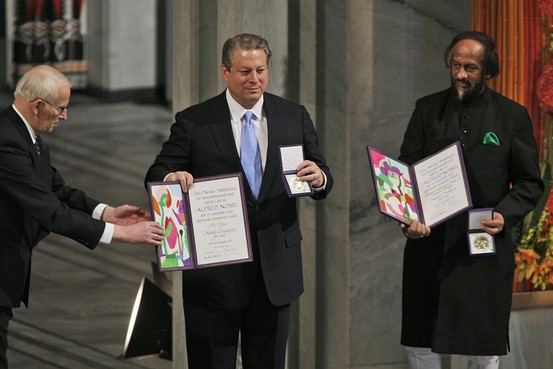 Last year, ExxonMobil donated $7 million to a grab-bag of public policy institutes, including the Aspen Institute, the Asia Society and Transparency International. It also gave a combined $125,000 to the Heritage Institute and the National Center for Policy Analysis, two conservative think tanks that have offered dissenting views on what until recently was called—without irony—the climate change “consensus.”

To read some of the press accounts of these gifts—amounting to about 0.00027% of Exxon’s 2008 profits of $45 billion—you might think you’d hit upon the scandal of the age. But thanks to what now goes by the name of climategate, it turns out the real scandal lies elsewhere.

Climategate, as readers of these pages know, concerns some of the world’s leading climate scientists working in tandem to block freedom of information requests, blackball dissenting scientists, manipulate the peer-review process, and obscure, destroy or massage inconvenient temperature data—facts that were laid bare by last week’s disclosure of thousands of emails from the University of East Anglia’s Climate Research Unit, or CRU.

But the deeper question is why the scientists behaved this way to begin with, especially since the science behind man-made global warming is said to be firmly settled. To answer the question, it helps to turn the alarmists’ follow-the-money methods right back at them.

Consider the case of Phil Jones, the director of the CRU and the man at the heart of climategate. According to one of the documents hacked from his center, between 2000 and 2006 Mr. Jones was the recipient (or co-recipient) of some $19 million worth of research grants, a sixfold increase over what he’d been awarded in the 1990s.

Why did the money pour in so quickly? Because the climate alarm kept ringing so loudly: The louder the alarm, the greater the sums. And who better to ring it than people like Mr. Jones, one of its likeliest beneficiaries?

Thus, the European Commission’s most recent appropriation for climate research comes to nearly $3 billion, and that’s not counting funds from the EU’s member governments. In the U.S., the House intends to spend $1.3 billion on NASA’s climate efforts, $400 million on NOAA’s, and another $300 million for the National Science Foundation. The states also have a piece of the action, with California—apparently not feeling bankrupt enough—devoting $600 million to their own climate initiative. In Australia, alarmists have their own Department of Climate Change at their funding disposal.

And all this is only a fraction of the $94 billion that HSBC Bank estimates has been spent globally this year on what it calls “green stimulus”—largely ethanol and other alternative energy schemes—of the kind from which Al Gore and his partners at Kleiner Perkins hope to profit handsomely.

Supply, as we know, creates its own demand. So for every additional billion in government-funded grants (or the tens of millions supplied by foundations like the Pew Charitable Trusts), universities, research institutes, advocacy groups and their various spin-offs and dependents have emerged from the woodwork to receive them.

Today these groups form a kind of ecosystem of their own. They include not just old standbys like the Sierra Club or Greenpeace, but also Ozone Action, Clean Air Cool Planet, Americans for Equitable Climate Change Solutions, the Alternative Energy Resources Association, the California Climate Action Registry and so on and on. All of them have been on the receiving end of climate change-related funding, so all of them must believe in the reality (and catastrophic imminence) of global warming just as a priest must believe in the existence of God.

None of these outfits is per se corrupt, in the sense that the monies they get are spent on something other than their intended purposes. But they depend on an inherently corrupting premise, namely that the hypothesis on which their livelihood depends has in fact been proved. Absent that proof, everything they represent—including the thousands of jobs they provide—vanishes. This is what’s known as a vested interest, and vested interests are an enemy of sound science.

Which brings us back to the climategate scientists, the keepers of the keys to the global warming cathedral. In one of the more telling disclosures from last week, a computer programmer writes of the CRU’s temperature database: “I am very sorry to report that the rest of the databases seems to be in nearly as poor a state as Australia was. . . . Aarrggghhh! There truly is no end in sight. . . . We can have a proper result, but only by including a load of garbage!”

This is not the sound of settled science, but of a cracking empirical foundation. And however many billion-dollar edifices may be built on it, sooner or later it is bound to crumble.