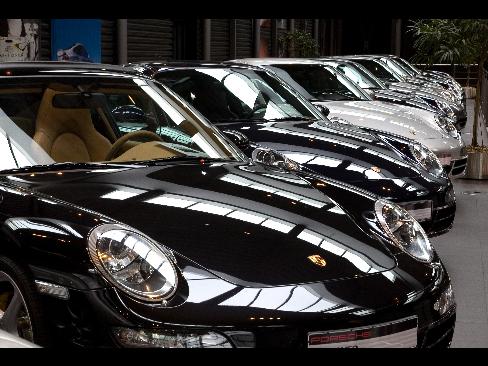 May 26 (Bloomberg) — Porsche SE, struggling to combine with Volkswagen AG, is in danger of losing some of the 17.3 billion euros ($24.3 billion) in profits recorded from holding VW options because it may not have the money to exercise them.

Porsche bought options and Volkswagen stock for more than three years and controls more than 70 percent of Europe’s biggest automaker. Now, Stuttgart, Germany-based Porsche may be unable to raise the money needed to cash in the options, according to research by Sanford C. Bernstein & Co., Sal. Oppenheim jr. & Cie. and FAIResearch GmbH & Co.

The 78-year-old maker of the 911 sports car piled up more than 9 billion euros in debt and hasn’t been able to raise the financing even after the options contracts surged in value along with the sevenfold gain in VW shares since 2005, according to the analysts. Porsche is attempting to negotiate a merger with Volkswagen and seek an investor to provide cash after its bid last year fell apart when VW’s home state of Lower Saxony vetoed the proposal and its car deliveries fell 27 percent in the six months ended Jan. 31.

“The smartest guys in the room are running out of options,” Max Warburton, a London-based analyst at Bernstein, said in an e-mailed message May 19. “We no longer believe Porsche is in a position to control the VW share price and are increasingly convinced that the VW ordinary shares will collapse.”

Porsche declined 4.6 percent to 41.74 euros as of 3:13 p.m. in Frankfurt, extending a 3.1 percent loss yesterday, when the Financial Times Deutschland reported the company faced a financing shortfall in June. VW shares decreased 2.5 percent to 216.95 euros today.

Albrecht Bamler, a Porsche spokesman, declined to comment on the FT report. On May 21, Frank Gaube, another spokesman for Porsche, said the company is “not in a risk situation,” and reiterated that it doesn’t comment on its options strategy. Christine Ritz, a spokeswoman for Wolfsburg, Germany-based VW, also declined to comment on the FT report and said last week that the company has demanded “transparency” in Porsche’s holdings.

Porsche owns options equivalent to about 20 percent of VW, according to estimates by Frank Biller, a Stuttgart-based analyst at Landesbank Baden-Wuerttemberg, on top of 50.8 percent of the company’s common stock. The contracts may be exercisable at 100 euros, according to the average estimate of six analysts surveyed by Bloomberg. Porsche hasn’t given details of the strike price.

Exercising options on 20 percent of VW’s 294.9 million outstanding shares at the strike price estimated by analysts would require 5.9 billion euros, according to data compiled by Bloomberg. The 20 percent stake would have a market value of 14.1 billion euros, based on yesterday’s price.

Holders of so-called call options get the right to buy a security at a fixed price by a given date. Put options give the right to sell.

Since 2007, Porsche has reported profits from VW options of 17.3 billion euros, according to its financial statements. The gains were booked as VW shares jumped 648 percent from 33.35 euros at the start of 2005, the year Porsche started buying its stake, to 249.45 euros at the end of January 2009.

The bulk of the earnings are on paper, said Gaube, the spokesman. As VW shares rose, so did the value of the options. Porsche has added the amount by which the options increased to its income statement, according to the company. Under so-called mark-to-market accounting rules, the profit would be reversed on the income statement as a loss if the options’ value fell, Gaube said.

Porsche over the last five years has the highest average return on equity, or profit made with money invested by shareholders, among 13 companies in Europe’s Dow Jones Stoxx 600 Automobiles & Parts Index, data compiled by Bloomberg show.

The sports-car maker had a return on equity of 38.7 percent, more than three times the 12 percent for Munich-based Bayerische Motoren Werke AG, the world’s biggest producer of luxury vehicles, and 8.1 percent for Stuttgart-based Daimler AG.

Net income at Porsche has increased by at least 10 percent in every year since 1999, data compiled by Bloomberg show. Annual profits at BMW have declined four times, while Daimler had three annual profit drops over the same period. Detroit- based General Motors Corp. has posted annual losses in each of the last four years, the data show.

Porsche received a credit line from Volkswagen that expires in September, Bamler, the Porsche spokesman, said yesterday. He wouldn’t provide the size of the loan.

Receiving cash from an investor may give Porsche enough money to exercise the options. Selling the calls or refinancing them with their underwriters also may allow Porsche to make money on the contracts, analysts said.

Talks between the automakers on details of a merger were put on hold after VW Supervisory Board Chairman Ferdinand Piech said Porsche has too much debt and he didn’t show up for a May 18 meeting of the company’s board. The companies said last week that they plan to set up an “integrated” car manufacturer, while Porsche said it’s in “promising talks” with an unidentified outside investor.

Porsche won’t sell the options, as long as it has a choice, said Georg Stuerzer, a Munich-based analyst at UniCredit SpA.

“It gives you a certain amount of value,” Stuerzer said in an interview last week. “I would be surprised if they sell them.”

Porsche shares have dropped 27 percent since May 6 after the two carmakers said they were working on a combination. VW’s common shares have lost 6.9 percent over that period.

The gains on Porsche were briefly much larger than they are today. After announcing its stake in October, VW common shares surged more than fourfold in two days, giving it a total stock market value of 275.3 billion euros and burning hedge funds that had sold the shares short. In a short sale, speculators borrow securities to sell them on expectations they will be able to repay the loan with shares at a lower price.

The company’s market value was 70.7 billion euros as of yesterday, according to data compiled by Bloomberg.

Porsche Supervisory Board Chairman Wolfgang Porsche is struggling to raise money to buy more Volkswagen equity, according to Bernstein and FAIResearch. Porsche and Piech are cousins whose grandfather, Ferdinand Porsche, founded the sports-car manufacturer and designed Volkswagen’s first model. Piech is also a member of Porsche’s supervisory board.

Porsche’s latest financial report shows 9.64 billion euros in “other liabilities,” without giving more details. Gaube, the spokesman, declined to comment on them.

Hans-Peter Wodniok, an analyst at FAIResearch in Frankfurt, and Warburton at Bernstein said some of the liabilities are probably puts on VW shares that Porsche issued and sold to finance the purchase of the calls.

Christian Breitsprecher, an analyst at Sal. Oppenheim in Frankfurt, said Porsche’s challenges may mount should it let the calls expire. That may spur banks that underwrote the calls to sell VW common shares they bought as insurance, lowering the stock.

“You just walk away from the calls,” said Breitsprecher. “It only becomes a problem when you’ve also written puts.”

To contact the reporter on this story: Alexis Xydias in London at axydias@bloomberg.net.