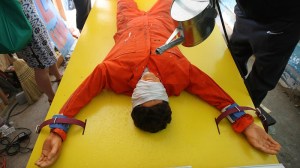 It didn’t turn out that way. “Mancow,” in fact, lasted just six or seven seconds before crying foul. Apparently, the experience went pretty badly — “Witnesses said Muller thrashed on the table, and even instantly threw the toy cow he was holding as his emergency tool to signify when he wanted the experiment to stop,” according to NBC Chicago.

Mancow was set on a 7-foot long table with his legs elevated and his feet tied.

“I wanted to prove it wasn’t torture,” Mancow said. “They cut off our heads, we put water on their face…I got voted to do this but I really thought ‘I’m going to laugh this off.’ “

The upshot? “It is way worse than I thought it would be, and that’s no joke,” Mancow told listeners. “It is such an odd feeling to have water poured down your nose with your head back…It was instantaneous…and I don’t want to say this: absolutely torture.”

“Absolutely. I mean that’s drowning,” he added later. “It is the feeling of drowning.”

“If I knew it was gonna be this bad, I would not have done it,” he said.

The 42-year-old radio host is no stranger to controversy. In 2005, he was maligned for saying that then-Democratic National Committee Chairman Howard Dean was “vile,” “bloodthirsty,” “evil” and “should be kicked out of America.”

Watch him be waterboarded in the following video:

And watch his response here: