“The very surge in U.S. debt — the Treasury plans gross issuance this fiscal year of $8 trillion — means China’s heavy buying is increasingly looking like a drop, albeit a very big one, in the ocean.”

“So rather than cut off financing for the U.S.’s record budget deficit for this fiscal year, China has instead, little by little, shifted its buying out of longer-term bonds.”

“The Chinese central bank was also unusually direct this month in expressing unease with U.S. economic policy, saying the dollar could come under serious pressure because the Federal Reserve was printing money to fend off the financial crisis.”

The bond bubble is bursting, the dollar will be destroyed. The greatest financial collapse in history is well on its way. 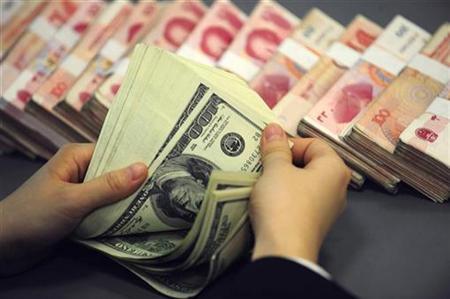 BEIJING (Reuters) – China has engineered a subtle yet significant shift in the investment of its foreign exchange reserves, a sign of how it is willing to act on concerns about financing an explosion of U.S. debt.

Beijing has been far and away the single biggest foreign buyer of Treasuries over the past year, but this apparent vote of confidence belies how it has turned its back on long-term U.S. debt in favor of shorter maturities.

China’s move to the shorter end of the U.S. debt spectrum is a defensive tactic adopted by the wider market as well on the view that the United States will have to raise interest rates down the road to control inflationary pressures when the economy recovers from the financial crisis.

But the shift also comes after pointed comments from Beijing expressing worries over the security of its U.S. investments and calls from Chinese government economists for a tough line with Washington in return for continued access to loans.

“The United States is making policy decisions purely according to domestic considerations and is giving little thought to the outside world,” said Zhang Ming, an economist at the Chinese Academy of Social Sciences (CASS), a leading think-tank.

“This being so, the Chinese government should prepare its defenses,” he said. “We can keep buying U.S. debt but we have to attach some conditions.”

But China’s leverage may be limited, despite sitting on the world’s largest stockpile of foreign exchange reserves at $2 trillion.

The very surge in U.S. debt — the Treasury plans gross issuance this fiscal year of $8 trillion — means China’s heavy buying is increasingly looking like a drop, albeit a very big one, in the ocean.

Beijing has also taken pains to stress that, while uneasy about the U.S. economic outlook, it views Treasuries as a safe investment. And it knows that it would lose a lot from a plunging dollar with so much invested in the U.S. already.

So rather than cut off financing for the U.S.’s record budget deficit for this fiscal year, China has instead, little by little, shifted its buying out of longer-term bonds.

For a chart showing China’s short-term buying, click on:

The shift illustrates how it was more than cheap talk when Premier Wen Jiabao said in March that he was “a little bit worried” about China’s investments in the United States.

The Chinese central bank was also unusually direct this month in expressing unease with U.S. economic policy, saying the dollar could come under serious pressure because the Federal Reserve was printing money to fend off the financial crisis.

The most recent data shows China bought more long-term notes than bills in March, but a single month does not reverse the marked change over the past year.

“Demand is weakening and it is being kept mainly at the short end,” said Andy Xie, an independent analyst and formerly Morgan Stanley’s chief China economist.

“This is an adjustment,” he said of China’s shift into Treasury bills. “This is not a collapse of confidence yet.”

Indeed, with its economy expected to speed up, China might soon have to contend with more speculative capital inflows, which would add to its forex reserves and force it to recycle yet more dollars into U.S. investments to cap yuan appreciation pressure.

“The most probable scenario is one where Chinese demand for Treasuries re-emerges on the back of renewed Chinese reserve growth,” said Brad Setser, an economist at the New York-based Council of Foreign Relations who tracks China’s forex flows into the United States.

For a chart showing China’s FX reserves and Treasuries, see:

China has long pledged to diversify its reserves away from the dollar. The composition of its reserves is a state secret but analysts estimate the proportion in Treasuries has increased. They say about two-thirds are held in dollar-denominated assets with at least $1.2 trillion in Treasuries or U.S. government agency debt.

With the United States needing to fund a huge deficit to support its recession-hit economy, Chinese government advisers have made bolder calls for Beijing to lock in better terms as its chief foreign financial backer.

Although not official policy, Zhang’s views offer a window onto how Beijing is giving more thought to how to flex its muscles in the U.S. debt market.

Yet China’s ability to pressure the United States may be about to diminish, and quickly.

China owns nearly a quarter of the U.S. debt held by foreigners, calculations based on Treasury data show.

But its share of debt held by the public — in the United States and abroad — has leveled off at 11 percent and is likely to drop, as Washington is on course to issue about $2 trillion of net new debt this year to finance its mushrooming deficit.

The bulk will be absorbed by Americans themselves, as the recession has driven U.S. households and firms to save far more.

For a chart on China’s weight in the Treasuries market, see:

“Conditions in the Treasury market will be increasingly determined by American demand for Treasuries and less determined by the scale of foreign demand,” Setser said.

This is very good news for both countries in at least one respect; it will help dismantle the “balance of financial terror” that has been said to define their relationship.

The United States is now less reliant on China for financing, and China in turn can diversify away from Treasuries without destroying the value of its existing holdings.

In theory, at least. Global markets’ fixation with China’s every move in managing its reserves will not fade away so easily.

“There is still the emotional impact of the idea of China diversifying,” said Stephen Green, chief China economist at Standard Chartered Bank in Shanghai. “If news of that leaked when the dollar was already weakening, the impact would be amplified.”