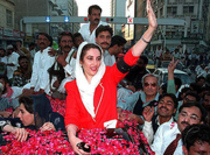 3 thoughts on “Seymour Hersh: Bhutto was killed on Cheney’s orders”