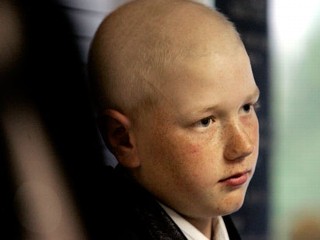 (NaturalNews) Against the wishes of both the parents and the 13-year-old patient in question, a Minnesota judge has ruled that Daniel Hauser must undergo conventional chemotherapy treatments, which are characterized by the mass-poisoning of the patient with toxic chemicals.

For opting to explore alternative and natural remedies rather than chemotherapy for their son, the parents were accused of medical neglect and now face having their son taken away from them by Child Protective Services (CPS). They may also face prison time if they refuse to follow the judge’s orders.

Daniel was diagnosed with Hodgkin’s Lymphoma, a health condition that is widely known by alternative cancer practitioners to be reversible (curable), especially in younger patients. Conventional medical doctors have told the courts that unless Daniel is subjected to toxic chemotherapy treatments, he has a 95% chance of dying.

That statistics is an outright lie. It is one of the many deceptive statistics put forth by the cancer industry in order to scare patients into submitting to extremely toxic protocols that cause far more harm than good.

There is not a single cancer patient that has ever been cured by chemotherapy. Zero. They don’t exist. Not a single documented case in the history of western medicine.

And why is that? Because conventional medicine operates from the false belief that there is no cure for cancer! Thus, anyone offering a cure (or assisting in the body’s own natural reversal of the disease) is immediately dismissed as a quack. Meanwhile, the real quackery is found in the pushing of toxic chemotherapy chemicals that are injected into the bodies of patients and called “treatment” when they should really be called “torture.” (Nancy Pelosi, by the way, was never briefed on the fact that chemotherapy is torture…)

What’s most disturbing in all of this, of course, is that the state is now forcing parents to poison their own children, requiring they hand over money to Big Pharma and conventional cancer treatment centers. The concept of freedom of choice has been stolen away from parents. The idea of protecting your children from toxic chemicals has been not just nullified, but made illegal!

All these things were apparently thrown out of the courtroom and almost certainly disparaged by drug-pushing doctors who claim that only their own chemicals can treat this disease.

Friday, May 15, 2009 by: Mike Adams, the Health Ranger, NaturalNews Editor