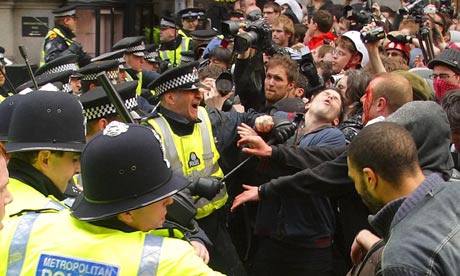 An MP who was involved in last month’s G20 protests in London is to call for an investigation into whether the police used agents provocateurs to incite the crowds.

Liberal Democrat Tom Brake says he saw what he believed to be two plain-clothes police officers go through a police cordon after presenting their ID cards.

Brake, who along with hundreds of others was corralled behind police lines near Bank tube station in the City of London on the day of the protests, says he was informed by people in the crowd that the men had been seen to throw bottles at the police and had encouraged others to do the same shortly before they passed through the cordon.

Brake, a member of the influential home affairs select committee, will raise the allegations when he gives evidence before parliament’s joint committee on human rights on Tuesday.

“When I was in the middle of the crowd, two people came over to me and said, ‘There are people over there who we believe are policemen and who have been encouraging the crowd to throw things at the police,'” Brake said. But when the crowd became suspicious of the men and accused them of being police officers, the pair approached the police line and passed through after showing some form of identification.

Brake has produced a draft report of his experiences for the human rights committee, having received written statements from people in the crowd. These include Tony Amos, a photographer who was standing with protesters in the Royal Exchange between 5pm and 6pm. “He [one of the alleged officers] was egging protesters on. It was very noticeable,” Amos said. “Then suddenly a protester seemed to identify him as a policeman and turned on him. He ­legged it towards the police line, flashed some ID and they just let him through, no questions asked.”

Amos added: “He was pretty much inciting the crowd. He could not be called an observer. I don’t believe in conspiracy theories but this really struck me. Hopefully, a review of video evidence will clear this up.”

The Independent Police Complaints Commission has received 256 complaints relating to the G20 protests. Of these, 121 have been made about the use of force by police officers, while 75 relate to police tactics. The IPCC said it had no record of complaints involving the use of police agents provocateurs. A Metropolitan Police spokesman said: “We would never deploy officers in this way or condone such behaviour.”

The use of plain-clothes officers in crowd situations is considered a vital tactic for gathering evidence. It has been used effectively to combat football hooliganism in the UK and was employed during the May Day protests in 2001.

Brake said he intends to raise the allegations with the Met’s commissioner, Sir Paul Stephenson, when he next appears before the home affairs select committee. “There is a logic having plain-clothes officers in the crowd, but no logic if the officers are actively encouraging violence, which would be a source of great concern,” Brake said.

The MP said that given only a few people were allowed out of the corralled crowd for the five hours he was held inside it, there should be no problem in investigating the allegation by examining video footage.