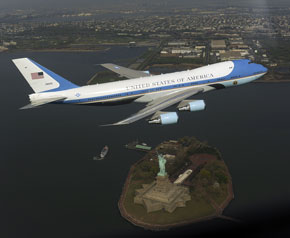 Photo of Air Force One released by White House.

WASHINGTON — A top White House aide resigned today for his role in Air Force One’s $328,835 photo-op flyover above New York City that sparked panic and flashbacks to the Sept. 11 terrorist attacks. His resignation was made public at the same time the photo of the flyover was released by the White House.

Louis Caldera said the controversy had made it impossible for him to effectively lead the White House Military Office. “Moreover, it has become a distraction in the important work you are doing as president,” Caldera said in his resignation letter to President Barack Obama.

The sight of the huge passenger jet and an F-16 fighter plane flying past the Statue of Liberty and the lower Manhattan financial district sent panicked office workers streaming into the streets on April 27. Obama said it would not happen again.

White House officials said the flight was designed to update the official photo of the plane, known as Air Force One when the president is aboard. The White House released a photo of the blue-and-white plane high above the Statue of Liberty, with New Jersey in the background.

The White House released the report late Friday afternoon via e-mail, with a short written statement from White House press secretary Robert Gibbs. There was no statement about the matter from Obama, who last month declared the embarrassment a “mistake” and vowed it would not be repeated.

That review, to be conducted by Deputy Chief of Staff Jim Messina and Defense Secretary Robert Gates, will also offer recommendations to Obama designed to ensure that such an incident will not happen again, Gibbs said.

When Obama appointed Caldera to the job during the presidential transition, the then president-elect hailed Caldera as having a resume that was second-to-none. Obama said then: “I know he’ll bring to the White House the same dedication and integrity that have earned him the highest praise in every post.”

His resignation takes effect May 22, but he is done at the White House Military Office now – not just as director, but in any part of the office’s work. He said he will use the two weeks of his employment to complete the necessary steps to leave the White House.