Prison officer Walter Schmidt wanted to give his colleagues’ children a taste of what their mums and dads get up to at work while showing them around a Florida jail.

So to make the youngsters’ experience all the more realistic as they toured Franklin Correctional Institution during the lock-up’s ‘Take our Daughters and Sons to Work Day’, he decided to zap them with his 50,000-volt stun gun.

The jolt sent at least two of them sprawling to the floor, crying out in pain and clutching at agonising burns on their arms. One child ended up in hospital.

But 37-year-old Schmidt told officials who later fired him that he had only been trying to show the children – whose parents all work at the jail near Tallahassee – what a typical day involves while handling unruly inmates.

‘It wasn’t intended to be malicious, but educational,’ he explained to the St Petersburg Times.

‘The big shock came when I got fired.’

Sgt Schmidt, who had served as a jailer for 14 years and was in charge of the prison arsenal, claims that he had asked permission from the children’s parents for the stunt. ‘When they said “Sure” I went ahead and did it,’ he shrugged.

Florida’s Secretary of Corrections, Walter McNeil, has ordered an investigation into the incident.

The stun gun Schmidt used, known as an electronic immobilisation device, delivers a shock up to 450 times stronger than the current in a household electric socket. 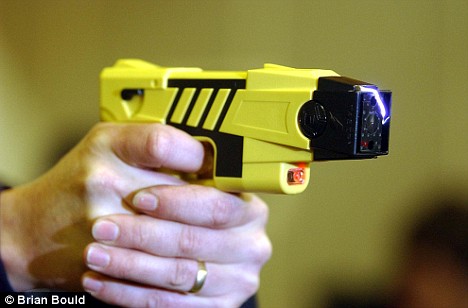 It must be held directly on the victim’s body to deliver a shock – unlike a Taser, which fires dart-like electrodes into the skin from a distance. The charge disrupts a person’s nervous system, causing involuntary muscle contractions that leave them temporarily immobilised.

Duffie Harrison, the chief warden at Franklin Correctional Institution, told Schmidt in a letter that he had ‘engaged in inappropriate conduct while demonstrating weapons to several kids during a special event at the institution.’

‘Your retention would be detrimental to the best interests of the state,’ the letter advised.