Alistair Darling’s calamitous Budget not only consigned the nation to decades of debt, but also planted a poisonous legacy that will blight generations to come. 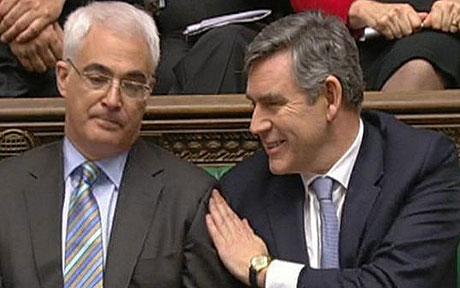 Alistair Darling and Gordon Brown have landed the voters in it Photo: PA

“To preserve [the people’s] independence, we must not let our rulers load us with perpetual debt. We must make our selection between economy and liberty, or profusion and servitude.”
Thomas Jefferson, President of the United States of America,1801-1809.

This week, Alistair Darling made a selection for us. His Budget for Bankruptcy banished economy and liberty. In their place, he delivered a profusion of unaffordable spending and a contract of servitude, not just for this generation, but for the next and the one after that. This is how independence is murdered. A ball-and-chain of spirit-sapping debt has been clamped to the nation’s future. We are all serfs now.

In a speech of stunning torpidity (how does he manage it?), the Chancellor claimed: “You can grow your way out of recession, you can’t cut your way out of it.” Growth sounds attractive, an aspiration for solid citizens. Except the growth that Mr Darling had in mind was government borrowing, which is shooting up like bindweed on steroids, choking the economy.

His red numbers are so immense that most pocket calculators cannot accommodate them. Over the next five years – if all goes according to plan – Mr Darling will borrow £703,000,000,000. As the late Roy Castle used to say: “It’s a record breaker!”

Related articles:
– Taxes ‘must rise’ by £45bn a year to meet Budget 2009 target (Telegraph)
– Time to bail out of Britain? (Telegraph)

The United Kingdom is mired in debt, and the Chancellor’s fiendishly clever escape route is, er, to borrow his way out of it. He’s in a hole and digging furiously. Yet Gordon Brown, whose face is beginning to resemble a smacked bottom, was delighted by his cipher’s performance. This style of presentation – straight from the Ceausescu handbook of statistics management – appeals to the Prime Minister’s control-freakery.

It sounds complicated, but is surprisingly simple. You start with a politically desirable conclusion – in this case, the triumph of a suffocating state over personal responsibility, self-sufficiency and wealth-creating enterprise – and work backwards: cheating, lying, fiddling the numbers, until both sides of the balance sheet appear to be in harmony. This is how Labour operated its fraudulent boom. The same trick is being tried in a catastrophic bust.

In order for Mr Darling not to overshoot his wild borrowing forecasts, some heroic assumptions need to be made about Britain’s prospects for robust recovery. So, guess what? He’s made them – in spades. By 2011, the British economy will be powering ahead – yes, expanding by 3.5 per cent annually (well above long-term trend). It really will. Lovely jubbly.

The genius of this approach is that it enables the Treasury to predict that public-sector net borrowing in two years’ time will be down to a “manageable” £140 billion, just 11.9 per cent of GDP. Covering this claim is a wafer of credibility so thin that even a blind mole in a deep sleep could see through it.

For the record, when state borrowing rises above 10 per cent of GDP, you expect the country’s leaders to look like Eli Wallach in The Magnificent Seven, attired in bullet-belts and chewing tobacco. But remember, these are Mr Darling’s best guesses. They could turn out to be – and almost certainly will turn out to be – much worse.

The form book provides some pointers. When Mr Brown was head chef at the Book Cooking Department, he almost always underestimated the gap between spending and receipts. In his final Budget speech in 2007 – a spectacular example of what The Economist labels his “moralising drivel” – Mr Brown told us that Government borrowing would be £30 billion in 2009, and then £28 billion, £26 billion and £24 billion; a total of £108 billion in the four years from 2009 to 12.

In terms of proximity to outcome, the distance apart is most effectively measured in light years. On Wednesday, Mr Darling adjusted those numbers to £175 billion, £173 billion, £140 billion and £118 billion, more than five times his boss’s boldly delivered forecast. Mr Brown does still keep in touch with Prudence, but only via a Ouija board. In the absence of the economy being fitted with turbo-charged boosters, there seems not the faintest possibility that the Budget deficit will, as promised, be halved by 2013-14.

But why are we even discussing events five years hence? In the weird world of Mr Darling, five months is an eternity. In that time, since the November pre-Budget report, his guidance has unravelled completely. It appears to have much in common with Damian McBride’s email output, only without the bile: both are products of life inside Mr Brown’s grand delusion.

Lest you think that doubts on the accuracy of Mr Darling’s foresight are cast only by curmudgeons in the press and other enemies of the NuLabocracy, allow me to draw your attention to a comment from Compass, the centre-Left pressure group, in its post-Budget press release: “We would warn the Government that its forecasts for economic growth contained in the Budget are all calculated on a boom-and-bust, pre-crash economic model which assumes rising consumption, rising house prices and the resulting consumer debt; the very same factors that contributed to the current economic and climate crisis.” Spot on.

Part of Mr Darling’s dangerous fiction is that by breaking his party’s manifesto promise, and raising the top rate of tax to 50 per cent, the widening chasm in state finances will be filled by the ill-gotten gains of the “rich”. This is crude electioneering. It appeals largely to those who lose count past 10 fingers and toes. If you add receipts from the upper-limit tax hike to the additional income generated by his attack on top earners’ pensions (through a restriction of tax relief), how much comes in? Well, on a sunny day, with a fair wind, with all the coins in the right slot, about £7 billion.

Marvellous. When you are spending, as Mr Darling is, £671 billion a year, £7 billion is little more than a rounding error. In order to drag back the deficit to somewhere near a sustainable level, there will have to be a squeeze on public spending not seen since Geoffrey Howe’s courageous but (at the time) immensely unpopular Budget of 1981. There is no evidence to suggest that Messrs Darling and Brown have either the appetite or backbone to impose such discipline. Their view of taxpayers’ cash is as a means to bribe voters.

Compare this year’s Budget with 2008’s and you’ll get the picture. At a time when most families are being forced to make sacrifices, the state is stepping up its binge. Overall, projected expenditure will increase by £53 billion, the biggest chunk of which will be swallowed by the euphemistically labelled “social protection” (mostly welfare payments). At £189 billion, this is expected to account for more than a quarter of all government outgoings. The really troubling category, however, is “other”, on which £72 billion is lavished (up from £67 billion). This is twice the allotment for defence. One dreads to think of the profligacy that is masked therein.

If the tipster at the bottom of The Racing Post‘s naps column had a forecasting record on a par with Mr Darling’s, his newspaper would shunt him to the obituaries section. But, for argument’s sake, let’s assume that the Chancellor’s projections are broadly correct. By 2013-14, Britain’s net debt will be 79 per cent of national output. At this level, we face possible humiliation as our creditworthiness crumbles and investors refuse to buy the Government’s devalued IOUs. As a country, we will be skint.

The most stomach-churning development to emerge from this debacle is that, as a result of Labour’s disgraceful stewardship, Britain is now locked into long-term structural indebtedness. Economic cycles come and go, but when the credit crunch eases, and the recovery begins, the need for very high levels of government borrowing, and therefore taxation, will not go away.

Jefferson set out the choices. This useless Government picked the wrong one.