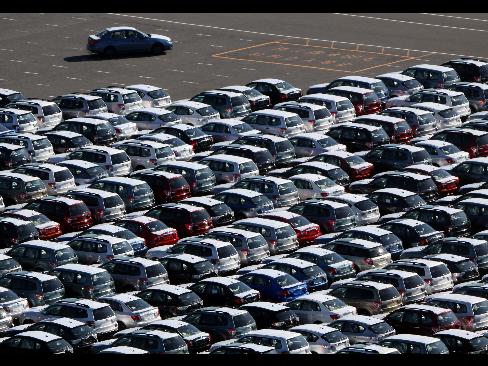 March 25 (Bloomberg) — Japan’s exports plunged a record 49.4 percent in February as deepening recessions in the U.S. and Europe sapped demand for the country’s cars and electronics.

The collapse signals gross domestic product may shrink this quarter at a similar pace to the annualized 12.1 percent contraction posted in the previous three months, the sharpest since 1974. Prime Minister Taro Aso is compiling his third stimulus package as companies from Toyota Motor Corp. to Panasonic Corp. fire thousands of workers.

“There’s a still of lot of weakness out there; that’s going to be a big drag on production and most people are looking for the first-quarter GDP to be as bad as the previous quarter,” said David Cohen, director of Asian economic forecasting at Action Economics in Singapore. “Japan is as dependent on exports as anybody.”

The yen traded at 97.83 per dollar from 98.25 before the report. The currency has weakened 7.3 percent this year, offering some relief to exporters whose profits were eroded by its 23 percent gain in 2008.

Last month’s drop in exports was the sharpest since at least 1980, when the government started to keep comparable data. Economists predicted a 47.6 percent decline.

Sentiment among Japan’s largest manufacturers probably fell to a 33-year low this month, economists predict the Bank of Japan’s Tankan survey will show next week.

World leaders from the Group of 20 economies will meet in London on April 2 to forge a common response to the financial crisis that spawned the global recession. Japan is siding with the U.S. in urging more fiscal stimulus, while European governments favor stricter rules for financial markets.

Finance Minister Kaoru Yosano said on March 22 that a new stimulus package of as much as 20 trillion yen, double the amount pledged since October, is “not out of line” as the world’s second-biggest economy heads for its worst recession since 1945. The spending would add to public debt already estimated at 170 percent of gross domestic product.

“There’s been a structural shock to the manufacturing sector,” said Hiroshi Shiraishi, an economist at BNP Paribas in Tokyo. “Yes, the government can create demand temporarily, but that can’t fill the export gap forever.”

Japan has become more reliant on exports in the past decade, making it especially vulnerable to changes in global commerce, which the World Trade Organization forecasts will shrink 9 percent this year, the most since World War II. During Japan’s expansion of 2002 to 2007, exports as a portion of GDP rose to 15.6 percent from 10.4 percent.

Asia’s largest economy fared worse last month than its neighbors. Exports from South Korea fell 17.1 percent, about half the pace of the decline in the previous month. Taiwan’s shipments slid 28.6 percent after dropping a record 44.1 percent in January.

“The fact that these other countries are doing a little better might give Japan some encouragement that world demand is bottoming out,” said Action Economics’ Cohen. “It should only be a matter of time before Japan shows the same stabilization.”

There are signs that China, Japan’s second-largest overseas market, is stabilizing. The World Bank said last week that government spending on roads, power grids and housing is “working” to take up the slack left by plunging exports.