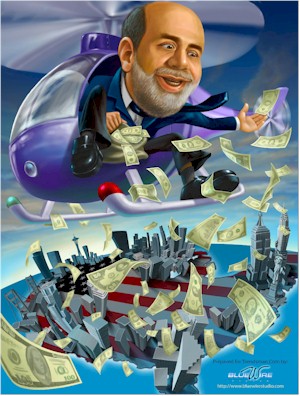 Now China should be much more than just worried!

March 18 (Bloomberg) — The Federal Reserve said it will buy $300 billion in Treasury securities and acquire more mortgage and agency debt in an effort to bolster housing and hasten the end of the recession.

“To provide greater support to mortgage lending and housing markets, the committee decided today to increase the size of the Federal Reserve’s balance sheet further by purchasing up to an additional $750 billion of agency mortgage- backed securities,” the Federal Open Market Committee said after a unanimous vote in Washington today. “Moreover, to help improve conditions in private credit markets, the committee decided to purchase up to $300 billion of longer-term Treasury securities over the next six months.”

Chairman Ben S. Bernanke is opening a new front in monetary policy after unemployment climbed to 8.1 percent and economists forecast the economy will shrink through the middle of the year. Fed officials also kept the benchmark interest rate at between zero and 0.25 percent and said it will consider expanding the Term Asset-Backed Securities Loan Facility to include “other financial assets,” the statement said.

Bernanke is trying to prevent the credit contraction from deepening what already may be the worst recession in 60 years. The U.S. jobless rate jumped to the highest level in more than a quarter century last month. Industrial production fell 1.4 percent, the fourth consecutive decline, while factory capacity in use slumped to 70.9 percent, matching the lowest level on record.

“Information received since the Federal Open Market Committee met in January indicates that the economy continues to contract,” the FOMC said in the statement. “The committee anticipates that policy actions to stabilize financial markets and institutions, together with fiscal and monetary stimulus, will contribute to a gradual resumption of sustainable economic growth.”

The global economy will contract this year for the first time since World War II, the World Bank predicts, forcing central banks to keep pumping money into their economies when conventional interest rates are at, or close to, zero. The Bank of England is buying government bonds and corporate debt, the Bank of Japan is snapping up government notes and making subordinated loans to banks, and the Swiss National Bank is intervening to weaken the franc.

The Fed has cut the benchmark rate from 5.25 percent, beginning in September 2007, as credit froze and the economy buckled. Policy makers are now focused on how to further channel money to the economy. The Fed has already committed to buying $600 billion of mortgage-backed securities and bonds sold by government-sponsored housing agencies.

The Fed’s actions pushed the average rate on a U.S. 30-year fixed rate mortgage to 5.03 percent on March 12, down from 5.15 percent the previous week. Still, rates are high relative to benchmark Treasury issues: Prior to today’s meeting, the difference between rates on 30-year fixed mortgages and 10-year Treasuries is 2.1 percentage points, Bloomberg data show. That’s up from an average of 1.75 percentage points in the decade before the subprime mortgage market collapsed.

Through emergency loans and liquidity backstops, U.S. central bankers have expanded Fed credit to the economy by an unprecedented $1 trillion over the past year. At the same time, forecasters at Macroeconomic Advisers LLC in St. Louis predict a 5.2 percent decline in first-quarter gross domestic product, following a 6.2 percent drop in the fourth quarter.

“It is the worst credit crunch since the Great Depression,” Laurence Meyer, a former Fed governor and vice chairman of Macroeconomic Advisers, said before the decision. “The banking system is reeling, credit is being choked off, it is dramatic in size.”

Banks worldwide have posted $1.2 trillion in write downs and credit losses on mortgage loans and other assets. U.S. Treasury officials will put the largest 19 banks through “stress tests” and decide whether they need more capital. The banks can raise equity privately or seek more government funds. Officials are also looking at ways to remove bad assets.

Bernanke, 55, told CBS Corp.’s “60 Minutes” on March 15 that he sees “green shoots” in some financial markets, and that the pace of economic decline “will begin to moderate.”

The Standard and Poor’s 500 index is up 11.5 percent this month. Chief executive officers from Bank of America Corp., JPMorgan Chase & Co., and Citigroup Inc. said their banks made money in the first two months of the year.

Coca-Cola Co., health insurer WellPoint Inc. and more than 30 other companies are tapping longer-term credit markets and paying down their short-term IOUs, a sign of some investor confidence.

Sales at U.S. retailers in February fell less than forecast and a gain in January exceeded the previous estimate, indicating the biggest part of the economy may be starting to stabilize.

Housing starts in the U.S. unexpectedly snapped the longest streak of declines in 18 years in February, adding to the series of data that suggest the pace of the economy’s decline may be easing.

Consumer prices rose 0.4 percent in February from a month earlier, the Commerce Department reported today. The annual core inflation rate increased to 1.8 percent, within the range most Fed officials say is their objective, easing concern about a deflationary spiral.

“There are always going to be some signs of revival; this is a resilient country,” said Julian Mann, who helps manage $4 billion in bonds at First Pacific Advisors LLC in Los Angeles. “But consumers are fearful, and when they are fearful they aren’t going to spend.”