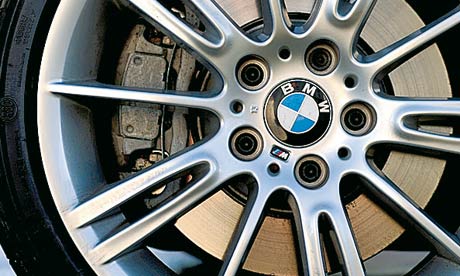 BMW profits are down 78% on last year. Photograph: Simon Stuart-Miller

BMW is slashing boardroom pay by 40%, executive pay by a third and employee wages and salaries by 10% in an effort to preserve cash and retain its independence in the current savage car-market downturn.

Norbert Reithofer, BMW’s chief executive, told a press conference: “I am convinced that our employees understand the difficulty of the current situation and are willing to accept this hardship.” The dividend has been cut from €1.06 to €0.30 in a savage blow to shareholders.

One official said: “I can live with this. At least I’ve got a job, a flat and a car.” But it is unclear how the 100,000-strong workforce will react after seeing a net 5,700 jobs go last year, 6,000 temporary staff lose their posts, including 850 at Mini’s Oxford factory, and plants put on a four-day week.

Reithofer said short-time working would be extended into April at core German plants but ruled out compulsory redundancies and factory closures and insisted that BMW was responding to calls from Germany’s chancellor, Angela Merkel, to the 30 leading companies in the Dax index to retain staffing levels.

“I’ve worked in this industry for many years and I’ve never seen a downturn like this,” he added. “But there is no hiring freeze.”

Friedrich Eichiner, chief financial officer, said that BMW would consider “new scenarios” or more savage cuts if the economic climate darkened. The group expects to surpass its target of material cost cuts of €4bn by 2012, and to raise productivity substantially.

Refusing to give any financial forecast for 2009, Reithofer reaffirmed the 2012 goals of a return on capital employed of 26%, and 8-10% return on sales. He expects sales to fall by 10-20% this year, and economic recovery to begin in 2010. But sales were down a quarter in January and February and Ian Robertson, BMW’s sales director, expects this trend to continue. The group has scrapped its target of selling 1.8m cars in 2012, reducing it by about 100,000.

“Our goal is to maintain the BMW group’s independence,” Reithofer said, scotching widespread speculation that the German premium carmaker would consider merging with Mercedes or even Peugeot Citroën as the automotive industry experiences its worst post-war crisis; he also ruled out a takeover of Opel, which is seeking a €3.3bn government-backed rescue.

Calling government bailouts for private companies “a mixed blessing,” Reithofer said ­liquidity and free cash flow were top priorities in the current economic environment. “Cash is king. We are in a position of financial security which provides us with considerable room for manoeuvre.”

Eichiner stressed that BMW was able to refinance its debts, albeit at higher costs, and the charges taken in the final quarter of 2008 did not represent a trend for the coming months. But he added: “We cannot rule out a further increase in credit defaults due to the global economic situation.”