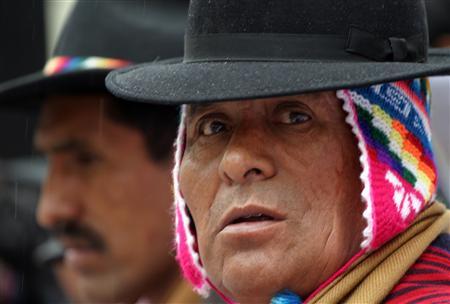 A Bolivian indigenous man participates in the celebrations marking the 228th anniversary of the siege of La Paz March 13, 2009. REUTERS

Morales handed out around 94,000 acres of lands recently confiscated from five big ranches in Bolivia’s wealthy eastern lowlands, a stronghold of his conservative political opponents. The ranchers have been accused of employing workers in conditions of semi-slavery.

“Private property will always be respected but we want people who are not interested in equality to change their thinking and focus more on country than currency,” said Morales, flanked by military and police personnel.

Among those who lost land was U.S. cattleman Ronald Larsen, who has emerged as a key opponent of the Morales government’s land reforms, which are designed to distribute more of the nation’s riches to poor indigenous peoples.

Larsen and other ranchers who had threatened to block the handover of their lands can still appeal the expropriations before agrarian courts.

An Aymara Indian and former leader of coca-leaf farmers, Morales is Bolivia’s first indigenous president. He has governed the resource-rich nation for three years.

He is especially popular among the poor and Aymara, Quechua, and Guarani indigenous groups that suffered centuries of discrimination in South America’s poorest country.

“Today, from here, we are beginning to put an end to the giant landholdings of Bolivia,” Morales said.

The land transfer came six weeks after Morales celebrated the approval of a new leftist constitution that aims to give Bolivia’s indigenous majority more power, lets him run for re-election and hands him tighter control over the economy.

The constitution also sets limits on single farm tracts to 12,400 acres and states that farms must meet certain economic and social conditions.

“It is not that these lands were not in production, but that they were the site of human rights violations against the Guarani, who will now be their new owners,” Morales said.