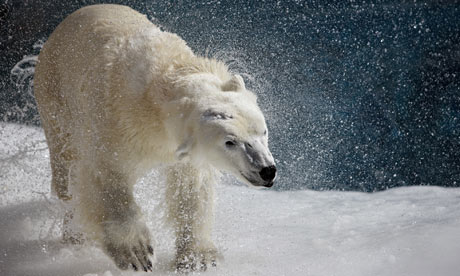 Climate change is said to be threatening the future of species such as the polar bear. Photograph: Mathieu Belanger/Reuters

It is billed as the largest ever gathering of climate change deniers, a convention that kicked off last night with a title suggesting global warming is a thing of the past, and a guest list that includes a hurricane forecaster, a retired astronaut and a sitting European president.

Entitled Global Warming: Was It Ever Really a Crisis? and featuring some of the most prominent naysayers in the climate change debate, this week’s conference in New York sets out to escalate its confrontation with the scientific establishment, the vast majority of whose members subscribe to the view that humans are the principal cause of climate change.

Conference organisers were celebrating something of a coup in securing as a keynote speaker the Czech president, Václav Klaus, at a time when his country holds the rotating presidency of the EU. Klaus, a Eurosceptic, believes that efforts to protect the world from the impact of climate change are an assault on freedom.

In his remarks last night, Klaus accused European governments of being “alarmist” on the subject of climate change and in thrall to radical environmentalists.

“They probably do not want to reveal their true plans and ambitions to stop economic development and return mankind several centuries back,” he said.

He received a standing ovation. But Klaus admitted that his position was a lonely one.

“It is evident that the climate change debate has not made any detectable progress,” he said. “It reminds me of the frustration people like me felt in the communist era.”

This week’s gathering by the Heartland Institute, a Chicago thinktank that shares the Czech president’s free-market views, brings together some of the more vocal critics of the scientific consensus, which maintains that rising temperatures are now so dangerous to people’s existence as to warrant urgent action.

Among more than 70 participants listed by the Heartland Institute is Jack Schmitt, a former astronaut, who now teaches engineering physics. William Gray, who is regarded as a leading hurricane forecaster, is also listed, along with Fred Singer, the atmospheric physicist who argues that a melting Arctic would have some positive effects, including the formation of the long-sought north-west passage. There is also a strong contingent of free marketeers and conservative commentators, including Christopher Booker and Christopher Monckton, both British.

Environmentalists argue that climate change denial, although the view of a minority, has damaged efforts to introduce policies to address the changes.

Kert Davies, research director for Greenpeace, says the climate change deniers have been adept at adapting their views as the public grows more conscious of the dangers of global warming.

The deniers also have resources. The Centre for Public Integrity said in a report last month that the lobby opposing climate change action gave work to 2,430 Washington lobbyists in 2008. The report estimated that about 15% of Washington’s lobbyists were now working to try to stop Congress from passing a law putting a cap on carbon.

“They are on the fringes – when you look at where the public is on this issue, where governments are on this issue, and where scientific organisations are on this issue,” said Kevin Grandia, the manager of DeSmogBlog, which seeks to counter misinformation on global warming. “The problem is when you take that fringe and add in the public relations ability to amplify that message. They have ingrained their message so well … it can easily be used as a tool to oppose legislation.”

Opinion polls show that about 58% of Americans believe human activity is causing climate change. However, many do not see a need for urgent action. A poll by the Pew Research Centre this year showed that climate change ranked last among topics of public concern to Americans.

The Heartland Institute was funded by Exxon Mobil until 2006. It disavows such links for this conference, but lists 55 sponsors, some of which do receive funding from Exxon and rightwing thinktanks.

How we deal with climate change: denial

Academics meeting in Bristol at the weekend for Britain’s first conference on the psychology of climate change argued that the greatest obstacles to action are not technical, economic or political – they are the denial strategies that we adopt to protect ourselves from unwelcome information. Nearly 80% of people claim to be concerned about climate change, but many people have a tendency to define this concern in ways that keep it far away. They describe climate change as a global problem (not a local one) and as a future problem (not one for their lifetimes). And 60% of people believe that “many scientific experts still question if humans are contributing to climate change” while 30% believe climate change is “largely down to natural causes”. Seven per cent deny climate is changing at all.
George Marshall