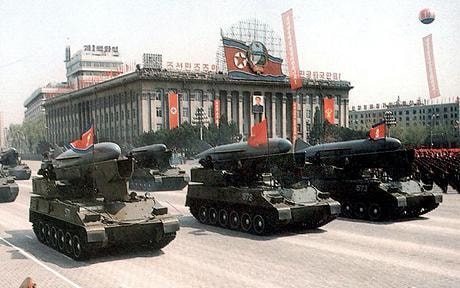 The North has put its army on full alert in the face of the annual spring military joint exercises begun today by the South Koreans and Americans.

It shut the border point which allows South Koreans to visit a special industrial zone in the city of Kaesong which is funded and run by South Korean companies. The South said 726 people had been turned back.

“It is nonsensical to maintain a normal communications channel at a time when the South Korean puppets are getting frantic with the above-said war exercises, levelling guns at fellow countrymen in league with foreign forces,” the North said.

Last week it also said it could not guarantee the safety of civilian aircraft which approached North Korean airspace during the exercises, causing airlines to adjust their routes.

This threat in particular is beyond the standard fare of North Korean rhetoric. It comes after six months of political uncertainty in relations between North Korea and the West, which had been improving slightly in the wake of a deal supposed to bring an end to its nuclear weapons programme.

Most western analysts linked the uncertainty to the stroke believed to have been suffered by the North’s leader, Kim Jong-il, last August.

This weekend he emerged to cast his ballot in elections for the country’s official parliament, in which he was a candidate.

Turn-out was 99.98 per cent, with every candidate achieving 100 per cent of the vote, according to state media. Only one candidate’s name appeared on each constituency ballot, and while it was theoretically possible to cross that candidate’s name off, electors had to do so in a special booth, making clear they were dissenters.

The main focus of interest during these elections was rumours that Kim’s youngest son, Kim Jong-woon, would stand.

There is as yet no clear sign of a succession to the leadership. If the rumours had been confirmed, Jong-woon would be the only one of the three sons to have been appointed to any official position, a clear sign that he was being marked out.

But the full list of names published last night contained no mention of him, consigning at least for the time being yet another of many stories about the secretive Kim and his family to the dust.