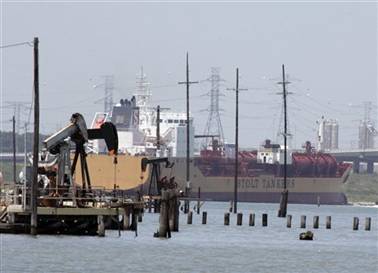 NEW YORK – Supertankers that once raced around the world to satisfy an unquenchable thirst for oil are now parked offshore, fully loaded, anchors down, their crews killing time. In the United States, vast storage farms for oil are almost out of room.

As demand for crude has plummeted, the world suddenly finds itself awash in oil that has nowhere to go.

It’s been less than a year since oil prices hit record highs. But now producers and traders are struggling with the new reality: The world wants less oil, not more. And turning off the spigot is about as easy as turning around one of those tankers.

So oil companies and investors are stashing crude, waiting for demand to rise and the bear market to end so they can turn a profit later.

Meanwhile, oil-producing countries such as Iran have pumped millions of barrels of their own crude into idle tankers, effectively taking crude off the market to halt declining prices that are devastating their economies.

Traders have always played a game of store and sell, bringing oil to market when it can fetch the best price. They say this time is different because of how fast the bottom fell out of the oil market.

“Nobody expected this,” said Antoine Halff, an analyst with Newedge. “The majority of people out there thought the market would keep rising to $200, even $250, a barrel. They were tripping over each other to pick a higher forecast.”

Nobody … except Lindsay Williams, who predicted this when the price of crude oil was at its peak!
The rest of his prediction is well on the way to manifest itself.
Here are two interviews with him:
– Lindsey Williams: America will see a financial collapse (1-22-09)
– Lindsey Williams: The Dollar And The US Will Collapse; Saudi Arabia And Dubai Will Fall; US Will Be Third World Country; The Greatest Depression Is Coming

(You may say what you want about him, but his predictions are here.)

Don’t miss:  Jim Rogers: We are going to have another Depression in the U.S.

Now the strategy is storage. Anyone who can buy cheap oil and store it might be able to sell it at a premium later, when the global economy ramps up again.

The oil tanks that surround Cushing, Okla., in a sprawling network that holds 10 percent of the nation’s oil, have been swelling for months. Exactly how close they are to full is a closely guarded secret, but analysts who cover the industry say Cushing is approaching capacity.

There are other storage tanks in the country with plenty of extra room to take on oil, but Cushing is the delivery point for the oil traded on the New York Mercantile Exchange. So the closer Cushing gets to full, the lower the price of oil goes.

Some oil is ending up in giant ships and staying there. On these supertankers, rented by oil companies such as Royal Dutch Shell, there is little for crews to do but paint and repaint the decks to pass time.

More than 30 tankers, each with the ability to move 2 million barrels of oil from port to port, now serve as little more than floating storage tanks. They are moored across the globe, from the Texas coast to the calm waters off Europe and Nigeria.

“It gets expensive to do this,” said Phil Flynn, an analyst at Alaron Trading Corp. “If you’re sitting on a bunch of oil and you’re stuck paying storage and insurance, and you can’t find a buyer, you may have to sell it at a discount just to get rid of it.”

On the other hand, as storage units on land have filled up, the companies that own the tankers have profited. Tanker companies charge an average of $75,000 a day, three times as much as last summer, to hold crude, said Douglas Mavrinac, an analyst with Jefferies & Co.

Demand for oil began to increase steadily in the early 1980s, and it went into overdrive in recent years as the Chinese economy surged and as producers pumped lakes of oil out of the ground to take advantage of a spike in prices. Then recession gripped the globe, frozen credit markets made things worse, and inventories swelled.

Refineries in the U.S. have cut way back on production of gas as the economy weakens and millions of Americans, many of them laid off, keep their cars in the garage.

The latest government records show U.S. inventories are bloated with a virtual sea of surplus crude, enough to fuel 15 million cars for a year. Inventories have grown by 26 million barrels since the beginning of the year alone. Oil from Saudi Arabia, the United Arab Emirates and Nigeria is finding few takers, even though much of it is used to make gasoline in the United States.

There are so many players in the international oil market that no one has enough control to sway prices. OPEC slashed production by more than 4 million barrels a day, and still the price of a barrel of crude languishes near $40. At its peak, it traded at $147 a barrel.

Experts aren’t sure what will happen when all that oil finally comes ashore.

(The same experts predicted $200 a barrel, so better don’t ask them.)

One fear is that with oil prices so low, companies will slash drilling and production, setting the world up for an energy crunch that would send prices soaring. The number of oil and gas rigs operating in the United States has fallen a staggering 39 percent since August.

Others say prices would plummet if companies forced millions of barrels onto the market at once.

“If everyone’s running for the exits at the same time, they’ll engineer a price collapse,” Flynn said.