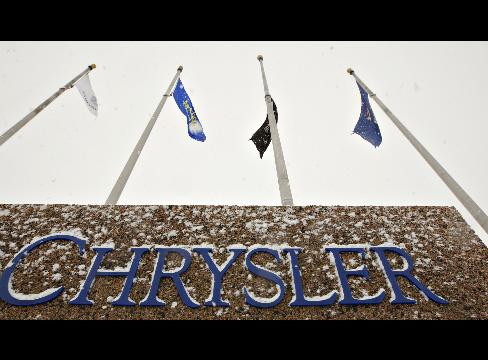 Feb. 17 (Bloomberg) — General Motors Corp. and Chrysler LLC, already relying on government aid to survive, take their case to the U.S. Treasury today that they can undo past mistakes and justify more U.S. aid to return to profit.

GM, with a pledge for $13.4 billion in loans, may seek support beyond an $18 billion request made Dec. 2 because of worsening economic conditions, people familiar with the automaker’s plan said. Chrysler has said it needs at least $3 billion in addition to $4 billion it received last month.

“Have they made mistakes? You bet they have,” former President Bill Clinton said yesterday at an environmental- building conference in Burbank, California. “Has the union made mistakes? Of course. But also the world changed, and frankly the political system kept ratifying the status quo for them. And I’m not pointing fingers. I was a part, we all have been.”

A final plan due March 31 will determine whether government support for the U.S. industry continues or if President Barack Obama’s administration may need to force the companies into bankruptcy to complete the restructuring.

The GM board in a phone call yesterday discussed the latest version of the report, which is about 100-pages long and is due to be submitted this afternoon, people familiar with the situation said. Discussions with the United Auto Workers union were continuing late last night, they said.

GM and Chrysler must show progress in getting creditors and the UAW to accept equity in place of billions of dollars in scheduled cash payments. The automakers must also ensure that future models will meet environmental rules that may require $100 billion in new technology.

“Everyone has a lot at risk,” said Dennis Virag, president of Automotive Consulting Group in Ann Arbor, Michigan. “If the UAW doesn’t provide concessions, and the union forces GM’s hand and they go into bankruptcy, it will be the end of the UAW as we know it.”

The progress report will be evaluated by Treasury Secretary Tim Geithner, White House economic adviser Lawrence Summers and a new automotive task force. The Obama administration created the panel rather than use a single “car czar” to supervise the federal loans, which were authorized by then-President George W. Bush’s Treasury Department Dec. 19.

Steven Rattner, co-founder of private-equity firm Quadrangle Group LLC, who had been considered for the auto czar position, may still join the government’s effort, said a person familiar with the situation.

GM is to receive $4 billion today, as scheduled, said a person familiar with the matter. The administration may give more money to the automakers if they demonstrate they can repay the loans, Geithner said in a Feb. 10 CNBC interview.

It’s unlikely GM and Chrysler will have complete agreements today with creditors or unions, said David Cole, chairman of the Center for Automotive Research in Ann Arbor, Michigan.

“This will lead into kind of a 4-way discussion between the government, the companies, the union and the bondholders,” said Cole, whose father was a GM president. “They are still working on parts of this.”

GM remains focused on reorganizing outside of bankruptcy, people familiar with the plans said this weekend. The automaker continues planning for the contingency as a last resort, the people said.

GM spokesman Tony Sapienza declined to comment yesterday on the status of the talks. Closely held Chrysler, controlled by Cerberus Capital Management LP, also continued to meet with the UAW and creditors about cost cuts with a goal of meeting the deadline, spokeswoman Shawn Morgan said.

The terms of the Dec. 19 loan agreements from the U.S. Treasury require GM and Auburn Hills, Michigan-based Chrysler to convince the UAW to accept equity instead of cash for half of next year’s scheduled payments into a union-run retiree health- care fund. The UAW walked out on GM talks Feb. 13 in a dispute over the proposal.

” I’d be willing to entertain eliminating their legacy costs,” Clinton said yesterday, referring to retiree medical coverage and similar expenses. “You’ve all heard the old saw that General Motors is a health-care company that produces cars on the side to try to defray some of its costs.”

GM said last week it will fire 10,000 of 73,000 salaried workers globally and cut the pay of many who remain. The automaker also is seeking to shed 1,700 of its 6,400 auto dealers. Chrysler is also seeking savings from dealers and suppliers.

In separate talks, GM and its bondholders are working to craft a debt exchange that gives investors who participate greater security and more seniority so that enough take part, a person with direct knowledge of the talks said this weekend.

GM needs to cut two-thirds of its $27.5 billion in unsecured public debt to $9.2 billion as required by the U.S. government.

“I think they are going to be burning the midnight oil,” Virag said. “It’s anyone’s guess what’s going to happen.”