So, Admiral, what have you got to say about the nuclear submarine crash? 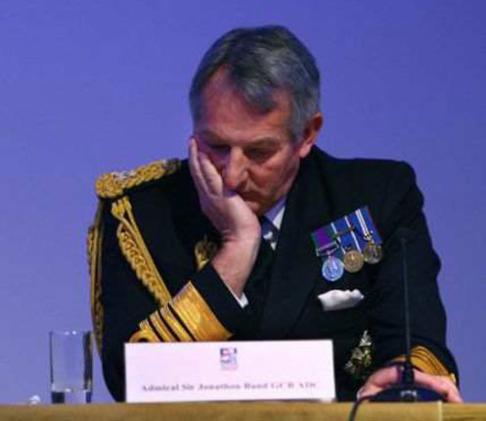 Defence chiefs are facing an inquiry into the safety of the United Kingdom’s nuclear deterrent after British and French submarines, each laden with missiles powerful enough for 1,248 Hiroshima bombings, collided while submerged in the mid-Atlantic.

HMS Vanguard, the lead boat of Britain’s fleet of four V-class submarines armed with Trident nuclear missiles, limped back into its home port of Faslane in Scotland on Saturday showing significant damage. Witnesses said the hull was scarred with dents and scrapes.

The weather was rough in the middle of the night of 3 and 4 February when the British submarine, which was carrying 135 crew, struck Le Triomphant, the flagship of the French nuclear strike force, destroying the French vessel’s fibreglass sonar dome, which juts out from the bow and, among other tasks, is supposed to detect other submarines. In London, the Ministry of Defence tried to maintain its policy of total secrecy about the movements of Briain’s nuclear fleet, but it was forced to confirm the embarrassing collision between strategic allies after the French Navy posted details of the accident on its website. Both countries insisted that neither the missile-launching capacity nor the nuclear safety of the submarines, carrying 265 crew and 32 intercontinental ballistic missiles, were affected.

Admiral Sir Jonathon Band, the First Sea Lord, said: “Recently, the two submarines came into contact at very low speed. Both submarines remained safe and no injuries occurred. We can confirm that the capability remained unaffected and there has been no compromise to nuclear safety.”

Defence sources said the accident was the result of the “infinitesimal” coincidence that both submarines were operating at the same depth and location in the Atlantic. Such a claim is undermined because Nato allies routinely share information at a top-secret level about the deployment of submarines to ensure they do not occupy the same area of ocean, an arrangement in which the French, whose nuclear deterrent remains independent, are understood to participate.

But nuclear-armed submarines often gravitate towards the same “nesting grounds” – deep, quiet sectors of ocean – to allow them to fulfil their mission by sailing continuously with minimal noise and remaining within range of potential targets.

For many years, Britain and France have maintained their nuclear deterrent by ensuring they have at least one of their missile-carrying submarines at sea 365 days a year with the ability to launch within seconds’ notice. Vanguard and Triomphant, which was at the end of a 70-day tour, each carry 16 intercontinental missiles, armed with between six and eight warheads in each.

Politicians said the incident raised serious questions about the precautions to protect the V-class nuclear vessels, which, at nearly 16,000 tonnes and 150m long, are among the largest submarines ever built. Similar questions were being asked in France, where the 14,335-tonne Triomphant returned to its base at L’Ile Longue, near Brest. The boat will spend up to four months in dry-dock undergoing repair. The French Navy intially claimed the submarine had been in a collision “apparently with a container”.

Nick Harvey, the Liberal Democrat defence spokesman, said: “While the British nuclear fleet has a good safety record, if there were ever to be a bang it would be a mighty big one. The public entrust this equipment to the Government confident that all possible precautions are being taken.”

Naval experts, who underlined that the two nuclear submarines were built with hulls designed to withstand huge pressures, expressed surprise that the sonar arrays of both had failed to detect either vessel. Sonar technology is now so sophisticated manufacturers boast it can recognise a small fish.

That it does not seem to have been able to pick out a submarine nearly the length of two football pitches and the height of a three-storey building could be explained by the development of stealth technology, making the submarines less visible to other vessels. Stephen Saunders, the editor of Jane’s Fighting Ships, said: “The modus operandi of most submarines, particularly ballistic-missile submarines, is to operate stealthily and to proceed undetected. This means operating passively, by not transmitting on sonar, and making as little noise as possible. A great deal of technical effort has gone into making submarines quiet by reduction of machinery noise. And much effort has gone into improving the capability of sonars to detect other submarines; detection was clearly made too late or not at all in this case.”

Anti-nuclear campaigners said the two vessels had been moments from a potentially catastrophic accident which could have resulted in the widespread release of radioactive material. Kate Hudson, chairwoman of the Campaign for Nuclear Disarmament, said: “This is a nuclear nightmare of the highest order. It is the most severe incident involving a nuclear submarine since the sinking of the Kursk in 2000 and the first time since the Cold War that two nuclear-armed subs are known to have collided. Vanguard is likely to be confined to port for months with a multimillion-pound repair bill. Gordon Brown should seize this opportunity to end continuous patrols.”

Several serious accidents have befallen the UK’s submarine fleet. In 2002, HMS Trafalgar suffered considerable damage when it ran aground on rocks off Skye in a training exercise. Last week, an inquest heard how two sailors on the Trafalgar’s sister vessel, HMS Tireless, died in an explosion caused by a faulty oxygen generator. Crewmates battled for 40 minutes to reach the two men after the force of the blast closed and buckled hatch doors.