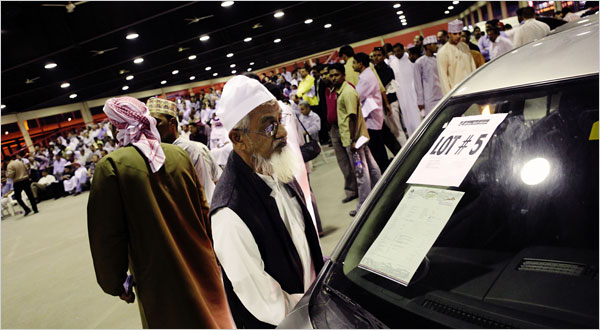 A prospective bidder examined a car on Wednesday at a Dubai auction. Debt-ridden foreigners are selling or abandoning cars. Bryan Denton for The New York Times

DUBAI, United Arab Emirates – Sofia, a 34-year-old Frenchwoman, moved here a year ago to take a job in advertising, so confident about Dubai’s fast-growing economy that she bought an apartment for almost $300,000 with a 15-year mortgage.

A car salesman in Dubai on Wednesday sat without customers. Lack of credit and a glut of cars on the market are cutting sales.

Police have found more than 3,000 cars outside Dubai’s international airport in recent months. Most of the cars – four-wheel drives, saloons and “a few” Mercedes – had keys left in the ignition.

Some had used-to-the-limit credit cards in the glove box. Others had notes of apology attached to the windscreen.

“Every day we find more and more cars,” said one senior airport security official, who did not want to be named. “Christmas was the worst – we found more than two dozen on a single day.”

When the market collapsed and the emirate’s once-booming economy started to slow down, many expatriates were left owning several homes and unable to pay the mortgages without credit.

“There were a lot of people living the high life, investing in real estate and a lifestyle they couldn’t afford,” one senior banker said.

Under Sharia, which prevails in Dubai, the punishment for defaulting on a debt is severe. Bouncing a check, for example, is punishable with jail. Those who flee the emirate are known as skips.

1,500 visas cancelled every day in Dubai

50% slump in the price of luxury apartments on Palm Jumeirah

Now, like many of the foreign workers who make up 90 percent of the population here, she has been laid off and faces the prospect of being forced to leave this Persian Gulf city – or worse.

“I’m really scared of what could happen, because I bought property here,” said Sofia, who asked that her last name be withheld because she is still hunting for a new job. “If I can’t pay it off, I was told I could end up in debtors’ prison.”

With Dubai’s economy in free fall, newspapers have reported that more than 3,000 cars sit abandoned in the parking lot at the Dubai Airport, left by fleeing, debt-ridden foreigners (who could in fact be imprisoned if they failed to pay their bills). Some are said to have maxed-out credit cards inside and notes of apology taped to the windshield. 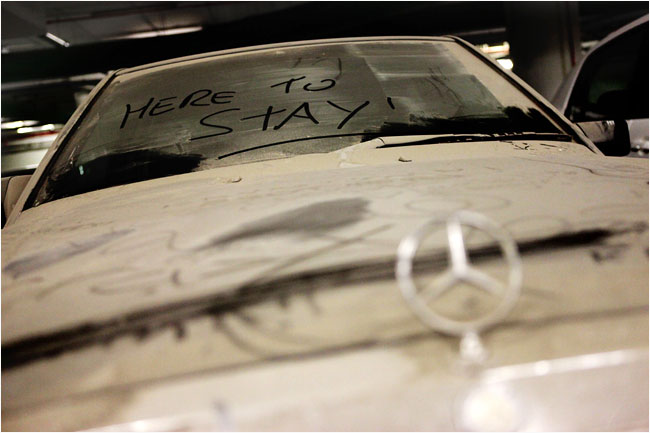 An abandoned car in a parking garage in Dubai. One report said 3,000 cars were sitting abandoned at the Dubai Airport.

The government says the real number is much lower. But the stories contain at least a grain of truth: jobless people here lose their work visas and then must leave the country within a month. That in turn reduces spending, creates housing vacancies and lowers real estate prices, in a downward spiral that has left parts of Dubai – once hailed as the economic superpower of the Middle East – looking like a ghost town.

No one knows how bad things have become, though it is clear that tens of thousands have left, real estate prices have crashed and scores of Dubai’s major construction projects have been suspended or canceled. But with the government unwilling to provide data, rumors are bound to flourish, damaging confidence and further undermining the economy.

Instead of moving toward greater transparency, the emirates seem to be moving in the other direction. A new draft media law would make it a crime to damage the country’s reputation or economy, punishable by fines of up to 1 million dirhams (about $272,000). Some say it is already having a chilling effect on reporting about the crisis.

Last month, local newspapers reported that Dubai was canceling 1,500 work visas every day, citing unnamed government officials. Asked about the number, Humaid bin Dimas, a spokesman for Dubai’s Labor Ministry, said he would not confirm or deny it and refused to comment further. Some say the true figure is much higher.

“At the moment there is a readiness to believe the worst,” said Simon Williams, HSBC bank’s chief economist in Dubai. “And the limits on data make it difficult to counter the rumors.”

Some things are clear: real estate prices, which rose dramatically during Dubai’s six-year boom, have dropped 30 percent or more over the past two or three months in some parts of the city. Last week, Moody’s Investor’s Service announced that it might downgrade its ratings on six of Dubai’s most prominent state-owned companies, citing a deterioration in the economic outlook. So many used luxury cars are for sale , they are sometimes sold for 40 percent less than the asking price two months ago, car dealers say. Dubai’s roads, usually thick with traffic at this time of year, are now mostly clear.

Some analysts say the crisis is likely to have long-lasting effects on the seven-member emirates federation, where Dubai has long played rebellious younger brother to oil-rich and more conservative Abu Dhabi. Dubai officials, swallowing their pride, have made clear that they would be open to a bailout, but so far Abu Dhabi has offered assistance only to its own banks.

“Why is Abu Dhabi allowing its neighbor to have its international reputation trashed, when it could bail out Dubai’s banks and restore confidence?” said Christopher M. Davidson, who predicted the current crisis in “Dubai: The Vulnerability of Success,” a book published last year. “Perhaps the plan is to centralize the U.A.E.” under Abu Dhabi’s control, he mused, in a move that would sharply curtail Dubai’s independence and perhaps change its signature freewheeling style.

For many foreigners, Dubai had seemed at first to be a refuge, relatively insulated from the panic that began hitting the rest of the world last autumn. The Persian Gulf is cushioned by vast oil and gas wealth, and some who lost jobs in New York and London began applying here.

But Dubai, unlike Abu Dhabi or nearby Qatar and Saudi Arabia, does not have its own oil, and had built its reputation on real estate, finance and tourism. Now, many expatriates here talk about Dubai as though it were a con game all along. Lurid rumors spread quickly: the Palm Jumeira, an artificial island that is one of this city’s trademark developments, is said to be sinking, and when you turn the faucets in the hotels built atop it, only cockroaches come out.

“Is it going to get better? They tell you that, but I don’t know what to believe anymore,” said Sofia, who still hopes to find a job before her time runs out. “People are really panicking quickly.”

Hamza Thiab, a 27-year-old Iraqi who moved here from Baghdad in 2005, lost his job with an engineering firm six weeks ago. He has until the end of February to find a job, or he must leave. “I’ve been looking for a new job for three months, and I’ve only had two interviews,” he said. “Before, you used to open up the papers here and see dozens of jobs. The minimum for a civil engineer with four years’ experience used to be 15,000 dirhams a month. Now, the maximum you’ll get is 8,000,” or about $2,000.

Mr. Thiab was sitting in a Costa Coffee Shop in the Ibn Battuta mall, where most of the customers seemed to be single men sitting alone, dolefully drinking coffee at midday. If he fails to find a job, he will have to go to Jordan, where he has family members – Iraq is still too dangerous, he says – though the situation is no better there. Before that, he will have to borrow money from his father to pay off the more than $12,000 he still owes on a bank loan for his Honda Civic. Iraqi friends bought fancier cars and are now, with no job, struggling to sell them.

“Before, so many of us were living a good life here,” Mr. Thiab said. “Now we cannot pay our loans. We are all just sleeping, smoking, drinking coffee and having headaches because of the situation.”