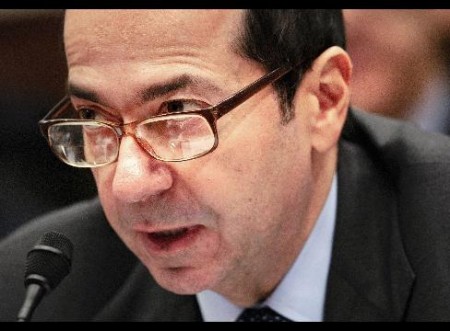 John Alfred Paulson, president of Paulson and Co., speaks during a hearing of the House Committee on Oversight and Government Reform on Capitol Hill November 13, 2008. Photographer: Brendan Smialowski/Bloomberg News

Paulson held a short position of 0.87 percent in Edinburgh- based RBS on Sept. 19, according to regulatory filings. The shares traded at 213.5 pence at the time, and Paulson’s disclosure indicates he borrowed and sold almost 144 million RBS shares with plans to buy them back at a lower price. He reduced his short position to less than 0.25 percent, or about 98.6 million shares, as of Jan. 23, according to a filing yesterday.

“They took positions in U.K. banks and their bearishness has been handsomely rewarded,” said Leigh Goodwin, a London-based analyst at Fox-Pitt Kelton Ltd. who has an “in-line” rating on RBS. “They timed their exit well.”

Paulson would have made 295 million pounds, assuming it still had a 0.25 percent short position on Jan. 23, when RBS closed at 12.1 pence. RBS, which said this month it will take as much as 20 billion pounds of writedowns in 2008 and post the biggest loss in U.K. history, is down 94 percent since Sept. 19. Paulson & Co. said its funds made more than $3 billion for the firm in 2007 by judging that the U.S. housing market and subprime mortgages would collapse.

Paulson, the 53-year-old founder of the $36 billion New York- based hedge fund, and his representatives couldn’t immediately be reached. The Financial Times reported the profit on the RBS short position earlier today.

Paulson still has bets on further declines for Lloyds Banking Group Plc and Barclays Plc, the London-based banks that rallied this week and regained some of their losses since last year.

The hedge fund had a short position of 1.17 percent in Barclays as of Oct. 31, according to regulatory filings. Barclays surged 73 percent yesterday to 88.7 pence after saying it will have a profit in 2008 and won’t have to raise more capital from the government. The shares are down 49 percent since Oct. 31.

Paulson disclosed a short position of 1.66 percent in Lloyds as of Oct. 31 and said the stake amounted to almost 0.8 percent as of Jan. 19 following the takeover of HBOS Plc. Lloyds jumped 32 percent yesterday to 65.2 pence, reducing its loss since Oct. 31 to 65 percent.

The Financial Services Authority, Britain’s market regulator, lifted a short-selling ban on financial companies including RBS and Barclays on Jan. 16. The restrictions were imposed last September after politicians and investors blamed hedge funds for destabilizing markets and interfering with the banks’ plans to increase capital by selling shares.

“It does appear a bit distasteful to anyone from the outside looking in,” said Michael Trippitt, a London-based analyst at Oriel Securities Ltd. who has a “reduce” rating on RBS. “To allow there to be a lift on the ban was plain daft.”

Short sellers borrow shares and sell them with plans to buy them back at a lower price. FSA Chairman Adair Turner said Jan. 22 that there was no evidence that short selling has led to significant falls in banking shares. The FTSE 350 Banks Index declined 58 percent in the last six months, with RBS, Lloyds and Barclays falling the most.

To contact the reporter on this story: Jon Menon in London at jmenon1@bloomberg.net