So Brown is either lying or incredibly incompetent.

Everybody who does not buy into corporate media brainwashing and has only the slightest interest in economics and politics saw this crisis coming. In fact it was very difficult not to see it.

In 1994 we were taught in university that there would most probably be a crisis coming around 2008 – 2010, by 1999 I knew that there would be a ‘staged’ world economic crisis. Long before 9/11 I told people that gold is ‘the’ investment for the future and I am definitely not a prophet.

Ron Paul, Peter Schiff, Jim Rogers, Max Keiser, Paul Craig Roberts and Marc Faber have warned years ago about this crisis and told people about possible solutions to the problems we are facing right now.

Britain’s recession could be the worst since the 1930s, an expert warned today in the wake of Gordon Brown’s admission that he hadn’t seen it coming.

As the pound dropped to a new low, economics boffins confirmed that the massive downturn was already bigger than anyone had predicted.

Charles Davis of the Centre for Economics and Business Research told The Telegraph that the contraction of the economy ‘supports our view that in 2009 the economy is set for the steepest contractions in the post-war era, with a fall in the region of 3 per cent year-on-year’. 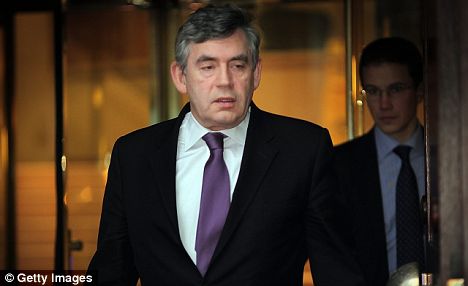 Under pressure: A bleary-eyed Gordon Brown emerging from a television studio today after admitting he had not foreseen the financial crisis

Mr Davis added: “Today’s figures are the final nail in the coffin for Prime Minister Gordon Brown’s claim to have ‘ended boom and bust.”

His sentiments were echoed by Roger Bootle, managing director of Capital Economics, I think there’s a very good chance this recession will be the worst since the 1930s. I suspect the economy could shrink by 6 per cent from last year to the end of next year – and that might not be the end.”

As the recession took a firmer grip yesterday, it emerged that the pound had closed at its lowest level in 24 years – sliding by more than three quarters against the U.S. dollar to $1.3668.

National Grid revealed that demand for electricity in Britain had fallen over the past few months. A spokesman told The Guardian that it would be cutting this year’s forecast for consumption as a result.

And even the Poles are leaving Britain’s recession behind. Experts have said that the reported increase in unemployment to almost two million is in part due to Polish workers returning to their own country, where their treasury minister believes they are safe from recession.

Aleksander Grad told The Guardian that the Polish economy would avoid recession because its banks were tightly regulated.

Despite his admission that he hadn’t foreseen the recession, the Prime Minister insisted his Government was fighting the recession with ‘every weapon at its disposal’.

But, in a stuttering radio interview, he refused nine times to accept that he had failed in his pledge to end Britain’s boom and bust economic cycle.

And, on one of the bleakest days for Labour since it came to power, Alistair Darling conceded the downturn was deeper than he had been expecting.

Figures out yesterday confirmed the UK is officially in recession.

Pleading for time for his policies of tax cuts, higher public spending and support for the banks to take effect, Mr Darling said the downturn was ‘undoubtedly sharper than many believed’.

Last November, he had to slash his economic growth forecasts for 2009 from 2.75 per cent to between minus 0.75 per cent and minus 1.25 per cent, with the upturn beginning from July. 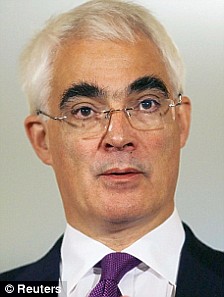 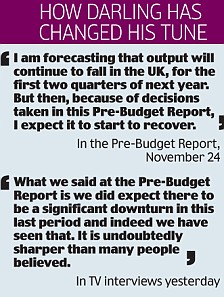 It now looks almost certain that he will again have to downgrade those figures again.

Many City experts expect the economy to shrink by more than 2 per cent during 2009.

The Prime Minister also warned that Britain will not emerge from recession this year unless there is international cooperation, claiming the global financial crisis was ‘ completely new territory’.

‘What we did not see, nobody saw, was the possibility of market failure,’ he said. 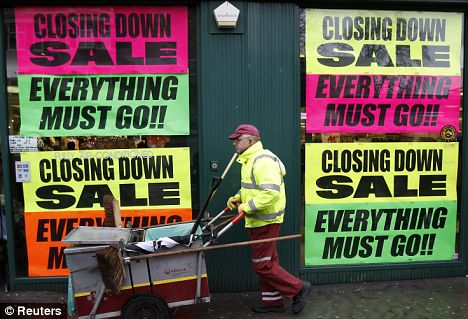 Struggle: Shops and other businesses are folding every week as they lose the battle to stay afloat as the recession bites

The Tories seized on yesterday’s devastating economic figures as evidence the Government was guilty of ‘optimistic’ forecasts last year.

They repeated their claim that Mr Brown could be forced to ask the International Monetary Fund for a bail-out.

But Mr Brown said David Cameron’s talk of Britain going bankrupt was ‘ridiculous behaviour’ and claimed he failed to understand the problems. 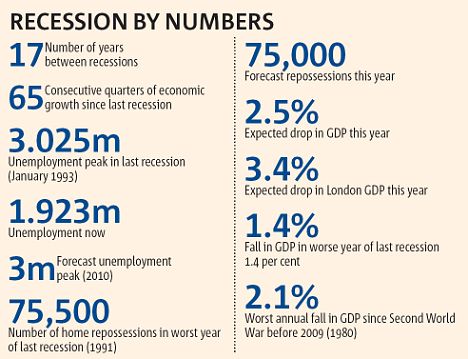 City analysts said the scale of the collapse was spectacular. The economy has now shrunk for two successive quarters – the accepted definition of recession.

If UK output continues to decline at the 1.5 per cent pace seen in the fourth quarter, it means we will see a 5 per cent fall for the whole of 2009.

That would mean Britain could suffer the steepest slump since the 1930s. ‘The economy is in freefall,’ said Michael Saunders, an economist at Citigroup bank.

‘The latest data highlight the astonishingly rapid and alarming collapse in UK economic activity across all major industry sectors and all regions of the country.’

John Cridland, of the Confederation of British Industry, said: ‘The intensity and speed of falling demand combined with the global credit crunch mean this recession is going to be more painful than the early nineties, and sadly one consequence of this will be much higher unemployment.’

The only part of the economy to record a positive result was agriculture, hunting, forestry and fishing, where activity grew by 0.1 per cent.

Economists predict unemployment will hit three million by early next year. Yesterday, the Federation of Small Businesses reported a 214 per cent rise in calls from firms seeking redundancy advice. 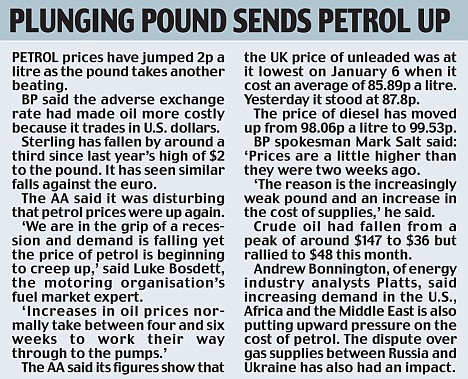