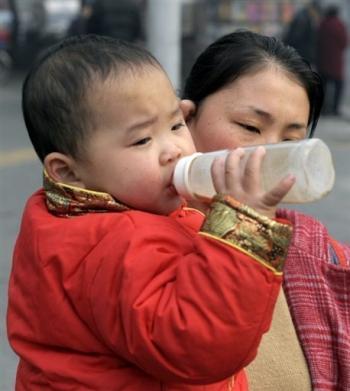 BEIJING (AFP) – A Chinese court on Thursday sentenced two men to death and gave stiff jail terms to 19 others over a milk scandal that led to widespread poisoning of babies in China and dairy recalls around the world.

The former head of the dairy firm at the heart of the scandal, Tian Wenhua, a 66-year-old woman accused of initially covering it up, was among three people jailed for life.

One other person was given a suspended death penalty, a sentence that routinely gets commuted to life in jail, while the rest were imprisoned for terms ranging from two to 15 years, state-run CCTV news reported.

The 21 people went on trial in recent weeks for their involvement in making or selling the contaminated milk that last year killed at least six babies and left 296,000 others ill with kidney and urinary tract problems.

The government immediately sought to portray the verdicts as proof of its efforts to ensure China’s food was safe, and that justice had been served, but victims’ relatives accused authorities of holding show trials.

“They got the penalty they deserved, but I feel sorry about this whole affair,” Liu Donglin, the father of a sickened baby, told AFP by phone from outside one of the courts in northern China where the verdicts were delivered.

“I think they are scapegoats. The milk producers’ association and the people in charge of checking the milk should also be punished.”

Relatives and lawyers have questioned why no government officials were charged, or how the massive scandal that involved 22 dairy companies could lead to charges against only 21 people.

“The relevant government authorities should be punished too,” Liu said.

Relatives of the victims and the foreign press were not allowed into the courts in Hebei province to hear the verdicts, but footage broadcast on CCTV showed the defendants wearing yellow prison coats with heads bowed.

The two men given the death penalty were found guilty of endangering public security by adding the industrial chemical melamine into the milk and then selling it on to middle men.

The melamine, normally used to make plastics, was added into watered-down milk to give it the appearance of higher protein content.

Sanlu Group, formerly headed by Tian, was the first and biggest of the 22 dairy producers found to have sold dairy products laced with melamine.

The government said it was making great efforts to improve not only its milk industry, but all its food products, following numerous safety scandals in recent years.

Aside from killing and sickening babies in China, the scandal led to contaminated Chinese dairy products being pulled off shelves around the world.

It was another major blow to the “Made-in-China” reputation that has suffered amid safety scandals over a wide range of exports, from toys to pet food and dumplings.

In its efforts to ease concerns domestically, the government last month ordered the 22 Chinese dairy firms to pay 160 million dollars in compensation to the families of babies that died or fell ill.

However the families and their lawyers have criticised the sum as woefully inadequate, with some parents of sick children not being given any money at all and others receiving just 300 dollars.

“They haven’t given me any compensation. They haven’t even recognised that my child died because of melamine,” Chang Lin, a farmer from Chongqing in southwest China whose 18-month-old son died in August, told AFP this week.