As I said before:
The Bank of England is destroying the pound and the government is taking care of the rest. If I would live in the U.K., then I would most probably flee from the coming meltdown. It seems difficult – to me – to hide from the coming collapse there. Please stock up food, water, clothes, gold, silver etc., especially if you can’t run from what is about to happen. Do not live in the cities. Don’t panic, prepare! 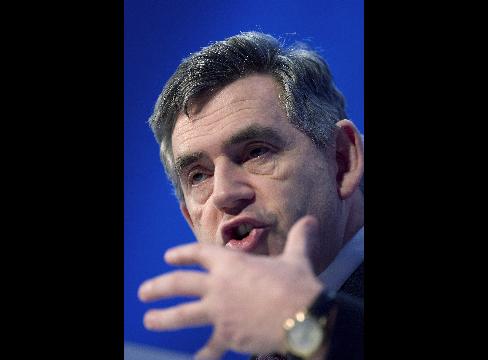 The Treasury authorized the central bank to buy 50 billion pounds ($73 billion) of assets and plans to raise its stake in Royal Bank of Scotland Group Plc to spur 6 billion pounds of lending. It’s also backing hundreds of billions of pounds of securities hurt by market turmoil.

“In return for access to any government support, there will have to be an increase in lending, and that will be legally binding,” Brown said at a press conference in London today. “I will not sit idly by and let people and businesses go to the wall.”

The measures extend the U.K. government’s October rescue plan, which included 50 billion pounds to recapitalize banks and a 250 billion-pound credit line for banks. Brown said he is “angry” institutions are rationing loans, pushing the economy deeper into its worst recession since World War II.

Governments in the U.S. and Europe are stepping up measures to underwrite bank lending after a recapitalization efforts failed to restore credit. President-elect Barack Obama is focusing the second half of the $700 billion rescue fund in the U.S. to underwrite loans to consumers and businesses. Spain and Denmark took action prop up their banking industries.

“This is aiming to once and for all underpin faith in the banking system,” said Alan Clarke, an economist at BNP Paribas SA. “We’re breaking all conventions. The availability of credit is going down, and the economic outlook is getting worse. So the government is having to throw more and more at it.”

Shares of RBS, Barclays Plc and HSBC Holdings Plc plunged on speculation the government would take a bigger stake in the companies or even nationalize the industry. Bonds fell, pushing up the yield on the U.K. 10-year government bond by 13 basis points to 3.43 percent as investors anticipated more sales of government debt securities.

“We have a clear view that British banks are best managed and owned commercially and not by the government,” Darling told Parliament today in response to suggestions from three Labour lawmakers that the government nationalize the banks. He also said he will “whatever is necessary to get credit flowing.”

Treasury officials are talking with banks about how much needs insuring and which assets should be eligible for the guarantee. Banks will pay the government a fee and absorb a small share of any loss, leaving the Treasury to foot the rest of the bill. Brown and Chancellor of the Exchequer Alistair Darling declined to put a value on the assets guaranteed.

“The risks to be insured are well-nigh open-ended,” said Stephen Lewis, chief economist at Monument Securities Ltd. He suggested the government impose a flexible fee on its guarantee so that it can raise costs as default risks increase.

Britain’s banks approved the fewest new mortgages in November since 1999 and told the central bank they would restrain credit in the coming months. RBS today announced a 28 billion pound loss, the biggest in U.K. corporate history.

Institutions worldwide are struggling to cope with $1.04 trillion in credit losses and writedowns since the collapse of the U.S. subprime mortgage market in 2007. Concerns about these toxic holdings have crippled lending and helped trigger a drop in global stocks last week.

The U.K. economy may contract 2.7 percent this year, the most since 1946, and house prices may plunge 22 percent in the next 1 1/2 years, the Ernst & Young Item Club said today. Brown’s popularity, buoyed in the weeks following his October bank rescue plan, has ebbed further behind the Conservative opposition as concern about the economy mounted.

“There will be public anger that even more taxpayer money has had to be put into the banking system, particularly among those who face losing their jobs or homes because of the irresponsible policies pursued by the banks,” said Brendan Barber, general secretary of the Trades Union Congress, whose 7 million members help fund Brown’s ruling Labour Party.

“The government needed to be bold as it has been,” said Richard Lambert, director general of the Confederation of British Industry. “These measures are not silver bullets that will turn the economy around overnight. They should stem a further downward recessionary spiral.”

Opposition lawmakers grumbled about Brown’s new plans, saying the government hasn’t explained how the funds authorized since October have been used.

“It is very difficult to sign up to a fresh package of government money when it is very clear that the previous massive injection has not been properly accounted for,” Vince Cable, a Liberal Democrat lawmaker who speaks on Treasury matters told Bloomberg Television. Conservative lawmaker George Osborne said, “We’ve run out of options” and the old package “isn’t working.”

Under Darling’s insurance plan, the government will charge a fee to guarantee about 90 percent of banks’ potential losses on assets hurt most by market turmoil, including securities backed by mortgages and loans to consumers.

The Treasury will implement the recommendations of James Crosby, the former chairman of mortgage lender HBOS Plc, who called on the government to back at least 100 billion pounds in home loans.

The government also is extending the 250 billion-pound Credit Guarantee Scheme it opened in October as part of the first round of the bailout. That program allows banks to issue bonds backed by the government and will now run until the end of this year instead of April 9 as originally planned.

“It looks to us as though this scheme, this insurance where you can put a floor under valuations, is very important,” said Angela Knight, chief executive of the British Bankers’ Association. “We favor this from the government.”

Also today, the government said it would raise its stake in Royal Bank of Scotland to 70 percent from 50 percent by swapping preference shares the Treasury took in the bank in October for ordinary shares. That will save RBS 600 million pounds in annual dividends owed to the Treasury, allowing the bank to increase its U.K. lending volume by 10 times that amount.

“This is basically making sure that the government gets something in return for all this money,” said Vicky Redwood, an economist at Capital Economics Ltd. who formerly worked at the Bank of England. “It will be a commitment to increase lending by a certain percentage.”

Financial institutions have refused to pass on Bank of England interest rate cuts by as much as the government wanted. While the central bank this month took its benchmark rate to 1.5 percent, the lowest since its foundation in 1694, U.K. banks haven’t matched those reductions in loan costs.

As rates approach zero, the central bank will have the authority to channel liquidity to financial institutions by buying assets. Darling said that, for now, the central bank’s asset purchases will be paid for by gilt sales, keeping money supply steady.

“The money that will go in from the Bank of England will be countered by normal money market operations,” Darling said at a press conference with Brown. “Interest rates in this country, although low, are still at 1.5 percent.”

Bank of England Governor Mervyn King will give more details about the plans in a speech tomorrow and in an exchange of letters that he and Darling will publish by the end of this month. The purchases may begin on Feb. 2, three days before the next rate decision. The bank also publishes quarterly forecasts on Feb. 11, signaling the direction of monetary policy.

“This is not quantitative easing in the strictest sense,” said Colin Ellis, an economist at Daiwa Securities SMBC Europe Ltd., who used to work at the central bank. “But that may come later. The Treasury’s statement that the scale of the scheme could be expanded suggests that funding for the scheme could also change.”

The Bank of England will buy assets including corporate bonds, commercial paper and syndicated loans, a tactic that can be used should officials decide “that this would be a useful additional tool for meeting the inflation target,” the Treasury said.

The central bank’s Special Liquidity Scheme, a 200 billion- pound facility designed to give financial institutions access to credit, will be closed at the end of this month as the new government programs begin to work.

Two more minor measures may have an impact on lending. Darling ordered Northern Rock Plc, the lender nationalized in February 2008, to repay government loans more slowly so that it can continue writing new mortgages. Before today’s announcement, Northern Rock had been winding down its lending book.

The Financial Services Authority also slashed the amount of capital that it tells bank to hold in reserve if they participate in the government bailout.

The industry regulator said the Tier 1 Capital Ratio that it requires of banks taking advantage of the government’s initial rescue plan in October could now be reduced to between 6 percent and 7 percent, from 8 percent.

Lloyds Banking Group, which completed its takeover of HBOS Plc today and sold a combined 4 billion of preferred shares to the U.K. last year, indicated it won’t swap them for common stock as RBS did.

The London-based bank said it is sticking to plans announced last November to repay the preferred shares, which pay the government a dividend of 12 percent a year, by the end of this year. Lloyds’s business has been “satisfactory” since December, and HBOS’s position hasn’t “significantly” deteriorated, it said in a statement.

To contact the reporter on this story: Gonzalo Vina in London at gvina@bloomberg.net; John Fraher at jfraher@bloomberg.net