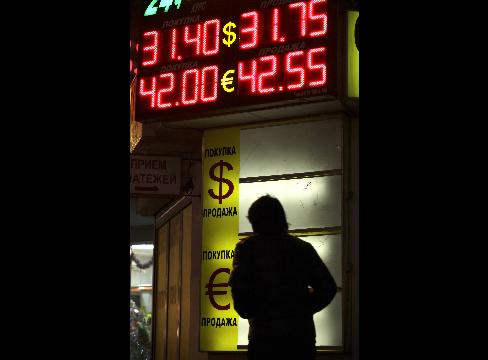 A pedestrian walks underneath sign advertising exchange rates for the Ruble against the U.S. Dollar and Euro, outside a currency exchange centre in Moscow, Russia, on Monday, Jan. 12, 2009. Photographer: Alexander Zemlianichenko Jr/Bloomberg News

Jan. 15 (Bloomberg) — Russia’s ruble tumbled to a record low against the dollar after the central bank devalued the currency for the fourth time in five days and Vedomosti reported the government slashed its estimate for oil prices by 20 percent.

The currency dropped to as low as 32.4112 per dollar, the weakest since Russia redenominated the currency at the start of 1998, before the financial crisis. The ruble’s trading band versus the dollar-euro basket has been widened, a Bank Rossii official who can’t be identified on bank policy said. The ruble has slumped 27 percent against the dollar since August.

“The bottom line is that they need to get this over with and the faster the better,” said Rory MacFarquhar, Moscow economist for Goldman Sachs Group Inc., which forecasts a further 12 percent depreciation in the ruble versus the basket. “They’re still catching up with what happened in oil last year. They’re still getting it to a sustainable level.”

Russia cut its average oil forecast for this year to $40 a barrel, from a previous $50, Vedomosti cited government officials as saying today. That’s the below the $70 average the government says is needed to balance this year’s budget. Urals crude, the country’s main export oil blend, has slipped 64 percent to $43.47 since August, pushing the energy-fueled economy toward recession.

The currency weakened 1.3 percent to 36.7700 versus the basket today. It closed at 36.2937 yesterday, when it was allowed to fall 1.4 percent. Devaluations in December averaged about 0.6 percent a day, according to MacFarquhar. The currency fell by an average 1.5 percent every day this week, according to data from Bloomberg and the Micex stock exchange.

Bank Rossii has devalued the ruble 16 times since Nov. 11, allowing it to weaken 21 percent against the basket, which is made up of about 55 percent dollars and 45 percent euros and is used to protect exporters from currency swings.

The country’s foreign-currency reserves, the world’s third- largest, fell by 27 percent, or $160 billion, in the last four months of 2008, as the bank sold currency to mitigate the ruble’s decline. Reserve levels will be updated today.

The worst financial crisis to hit the country since it defaulted on $40 billion of debt in 1998 and investor concern about Russia’s invasion of neighboring Georgia in August spurred a record $129.9 billion to be withdrawn from the country last year, according to central bank figures released on Jan. 13. BNP Paribas SA estimates outflows between August and December at more than $200 billion.

The ruble is now able to fall about 20 percent below Bank Rossii’s target basket rate, from 3.6 percent on Nov. 11.

To contact the reporter on this story: Emma O’Brien in Moscow at eobrien6@bloomberg.net