Millions of Britons are finally waking up to the fact that their beloved light bulb will disappear for good after 120 years.

Traditional 100-watt bulbs are vanishing from the High Street because of a controversial European Union decision.

Yesterday panic buyers were snapping up the remaining bulbs in a last-ditch attempt to stockpile the final supplies. Hundreds of leading supermarkets and DIY chains – including Sainsbury’s, Asda and Homebase – have already sold their last remaining bulbs after a surge in panic buying.

Other stores say they have enough stocks to last until the end of next week.

The supplies are running out after the Government signed up to an EU decision to replace conventional 100w light bulbs with supposedly greener low energy alternatives.

Ministers claim the switch will reduce carbon dioxide by around five million tons each year.

But experts have questioned whether or not the new bulbs, far from being environmentally friendly, are actually harmful.

There is also concern because the fluorescent bulbs contain mercury, which makes them dangerous to get rid of.

They can also be more expensive. Currently, an average supermarket price for a six pack of standard 60w pearl light bulbs is £1.21, but a single 60w low energy stick light bulb already costs around £2.19.

Retailers stopped replenishing supplies of conventional incandescent 100w bulbs at the start of the year under a ‘voluntary’ Government scheme to force people to buy green compact fluorescent lights. 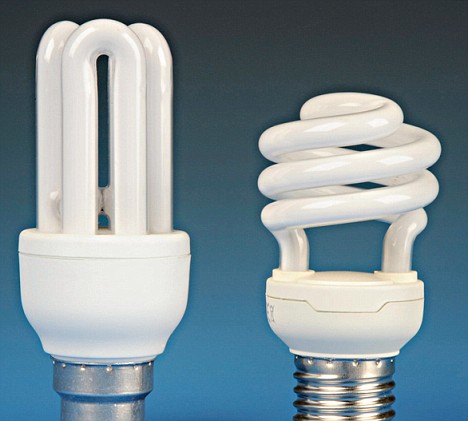 New light: Energy-efficient bulbs use less energy – but critics say they can cause skin rashes, migraines and epilepsy

But concerns about the poor quality light of low energy bulbs – and the fact that most don’t work with dimmer switches – has led to tens of thousands of people stockpiling supplies.

Sainsbury’s said it had ‘virtually run out’ of traditional 100w bulbs, while Homebase, John Lewis and Asda confirmed they no longer had them on their shelves. Tesco, Britain’s biggest seller of bulbs, said it had enough for a few days.

Smaller retailers and corner shops also reported running out of stock, while shoppers at branches of Waitrose and Argos left empty handed.

One householder, Loretta Spottiswood, said she had stockpiled 50 conventional bulbs in a cupboard at her home in Ham, South-West London.

‘I have such a horror of energy saving bulbs that every time I go to Sainsbury’s I buy a couple of the conventional ones,’ said Mrs Spottiswood, 62.

‘My neighbour opposite has energy saving bulbs and the lights are horrible and they take ages to warm up. I also get quite depressed in the winter, particularly if the lighting is dim. I hate them.’ 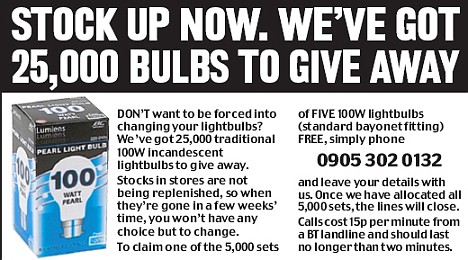 One panic buyer, who asked not to be named, snapped up 20 traditional bulbs at a branch of Ryness. ‘My husband went to Sainsbury’s last week and couldn’t get any, then we managed to buy a couple at Tesco,’ she said.

‘I bought some at a corner shop, but there were none at Waitrose or Homebase. My husband tried again at Tesco and they had sold out.

‘I use them in about seven rooms. I have only got one energy saving light bulb and I hate it, the light is horrible and it makes me feel ill.’

The death of the conventional incandescent bulb was announced by Gordon Brown in 2007. The Government wants people to switch to low energy compact fluorescent lights (CFLs) to help meet its climate change targets.

A CFL uses a fifth of the energy of a conventional bulb and can save £7 a year in bills.

The 100w bulbs being phased out are used in ceiling lights and are Britain’s best seller. Last year retailers stopped selling 150w bulbs, while they will phase out 60w bulbs next year.

The voluntary ban covers only high street chains and supermarkets; 100w bulbs will still be available from smaller independent stores for a few months.

However, the EU will impose a ban on sales of 100w bulbs from September. It will also ban all types of frosted glass incandescent bulbs.

Critics say the light from CFLs is harsh and flickery. Medical charities say they can trigger epileptic fits, migraines and skin rashes.

Ordinary compact fluorescent lights also do not work properly in dimmer switches. Those with dimmer switches have to buy a specialist dimmable CFL, which costs around £12, or opt for a less efficient halogen light.

Peter Hunt, of the industry body the Lighting Association, said the price of dimmable CFL bulbs would fall over the next few years. Dimmable halogen lamps, shaped liked conventional bulbs but which use around 70 per cent of the energy, were also available.

The Department for Environment, Food and Rural Affairs confirmed that it will have no power to enforce fines or legal proceedings until 2016.

The ‘voluntary’ phase agreed by retailers is set to remain in place until 2012. Tougher measures could then be imposed on retailers who continue to stock traditional bulbs but criminal charges will not be possible until EU mandates are implemented in 2016.

Reporter BETH HALE on the great bulb hunt: ‘Yes I found some… but it wasn’t light work’

How many women does it take to change a 100watt bulb? Well, one, of course. But it does depend on whether she can find one.

I set off on a quest to illuminate the issue of diminishing supplies.

My journey begins in a small branch of Tesco where six-packs of 100w bulbs at £1.21 are on a buy-one-get-one free offer. I could have a dozen bulbs at 10p a piece – if only there wasn’t a gaping hole on the shelf. 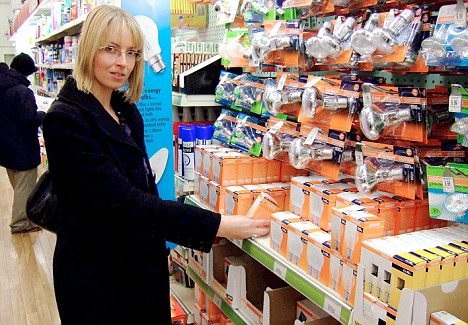 Energy saving bulbs are on special offer. But deciphering what bulb to buy is no easy task. In days gone by it was a straightforward process – there was clear or pearl, bayonet or screw cap, and then the wattage, usually 40, 60 or 100.

What I really want to know is which bulbs can be used with a dimmer switch as most normal low energy lightbulbs aren’t compatible with a dimmer. Unfortunately, the only member of staff I find doesn’t know.

Next I pop into Argos. They too are out of stock. They do have three packs at a store in Victoria and two in Wembley but that’s a bit far to go for a lightbulb.

I ask an assistant: ‘Do you know which one I need, if I have a dimmer switch?’ ‘I don’t know, I thought they all worked,’ comes the reply.

At a branch of Ryness, the electrical supplies store, the shelves have again been emptied. ‘People have been buying boxes and boxes at a time,’ says a helpful assistant.

If I can wait a few days he does assure me there will be more bulbs in – supplies are still high at the warehouse. The sales assistant is able to offer some help on the dimmer switch issue, pointing out a dimmer-compatible bulb. Unfortunately it’s £17.99.

At Waitrose a sign tells me there is no stock available and at a bigger branch of Tesco there is another empty space in light bulb corner.

At Homebase it’s even worse. A sign says the bulbs have been discontinued and a sales assistant tells me it’s no longer legal to sell them from this year, which I’m sure isn’t actually true.

Then I walk into Robert Dyas – and there before me is a whole shelf laden with bulbs, two-packs, four-packs, bayonet or screwcap, enough to light up my small flat and probably the rest of my street.

Unfortunately since old-fashioned bulbs are now selling quicker than hot cakes, they probably won’t be around for much longer.

2 thoughts on “Revolt! Robbed of their right to buy traditional light bulbs, millions are clearing shelves of last supplies”