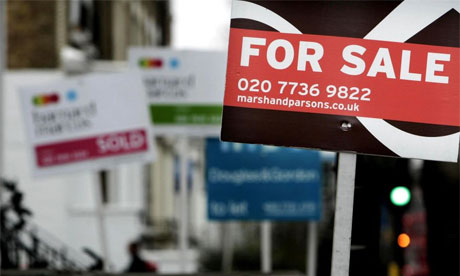 You have to hand it to the Nationwide, and, indeed, the Halifax.

Both lenders, in producing their monthly reports showing prices fell more than 2% in a single month in December, are saying that things are not as bad as they look.

The pace of decline is steadying, they argue, rather than accelerating. The Nationwide said this morning argued that the three-month on three-month fall was “only” 4.2%. That may be true but it would still give you an annualised fall of 17%.

The truth is you can take your pick but nothing changes the picture that the housing market is in free fall and has considerably further to go given the scarcity of mortgage finance, particularly for first-time buyers, and given the idea that people don’t want to buy now when they think they can buy cheaper in year’s time.

Quite how far house prices will fall is anyone’s guess. Prices are down now about a fifth from the peak in autumn 2007. Add in inflation over that period of 5-6% and you have a real-term fall of about a quarter.

Some optimists say that the big recent interest rate cuts and the fact that prices have fallen a lot mean we are now quite close to the bottom. Others argue, more realistically, that we are only half way through this process, given that unemployment is rising so strongly, and that prices will probably shed 50% in real terms by the time the market stabilises next year or in 2011.

For now auction prices offer a good indication that prices have further to fall. They are down about 35% or more from the peak. Auctions are interesting because they represent actual cash sales taking place where mortgage finance is not necessary.

Some argue that they do not represent the wider market since many of the sellers are “distressed” in the sense that they have to sell at almost any price. But they nevertheless provide a clue as to what realistic buyers are prepared to pay for properties and therefore how much further the wider market will have to fall before it clears.

Elsewhere today, the Chartered Institute of Purchasing and Supply’s monthly survey of the dominant services sector was awful and close to November’s record low. You could argue that the lack of a further drop shows the sector is beginning to stabilise but that is a brave call.

This economy is getting worse at an alarming pace and needs all the help it can get. A majority of City pundits thinks that the Bank of England will cut rates by half a point this week to an all-time low of 1.5%. But that same majority has spent much of the past 12 months getting the economy spectacularly wrong. The Bank is much more likely to cut by a full point to 1% on Thursday.