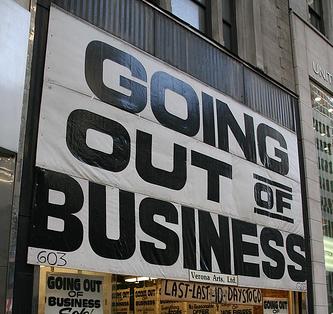 Retailing has always been a tough business. Now it’s a brutal business. Some observers now predict that more than 25% of retailers may go bust in the the next two years.

A great WSJ quote driving home how this truly is retail’s Schumpeterian moment:

Analysts estimate that from about 10% to 26% of all retailers are in financial distress and in danger of filing for Chapter 11. AlixPartners LLP, a Michigan-based turnaround consulting firm, estimates that 25.8% of 182 large retailers it tracks are at significant risk of filing for bankruptcy or facing financial distress in 2009 or 2010. In the previous two years, the firm had estimated 4% to 7% of retailers then tracked were at a high risk for filing.

Granted, many retailers are perpetually on the verge of bankruptcy, but these are still unprecedented numbers. Retail, as we know it, is going to look very, very different a decade from now.

The first retail casualty of the weak holiday season could be Goody’s Family Clothing Inc., a Southeast apparel retailer. The 287-store chain emerged from bankruptcy court in October but its holiday sales were below plan and financing it was counting on didn’t materialize, according to a person familiar with the situation. The retailer is negotiating with lenders to avoid potential liquidation, say two people familiar with the matter.

A representative for Goody’s was unavailable to comment. But in October, Chief Executive Paul White was upbeat about its prospects, saying “we are energized by the opportunity in front of us and are focused on continuing to fulfill the Goody’s mission.”

Other retailers are saying they will trim inventory and reduce the number of suppliers. That, in turn, will cause a ripple effect, prompting a number of weaker manufacturers, small brands and underfunded fashion labels to fail. New retail formats and concepts stores are likely to be curtailed in the coming year. And luxury-goods makers already are working to cut the long lead times between orders and store delivery as a way to reduce risk.

“We will have a lot fewer stores by the middle of 2009,” says Nancy Koehn, professor of business administration at Harvard Business School. “It’s happening very, very quickly because of the financial crisis and the recession.”