How “shocking”!?
Human beings have killed each other by the millions on this planet because they were ordered to do so. 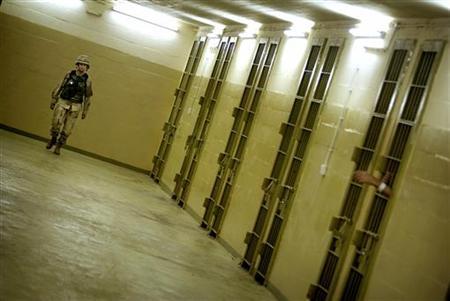 A U.S. soldeir walks between cells at Abu Ghraib prison outside Baghdad in a 2004 photo. REUTERS/Damir Sagolj

WASHINGTON (Reuters) – Some things never change. Scientists said on Friday they had replicated an experiment in which people obediently delivered painful shocks to others if encouraged to do so by authority figures.

Seventy percent of volunteers continued to administer electrical shocks — or at least they believed they were doing so — even after an actor claimed they were painful, Jerry Burger of Santa Clara University in California found.

“What we found is validation of the same argument — if you put people into certain situations, they will act in surprising, and maybe often even disturbing, ways,” Burger said in a telephone interview. “This research is still relevant.”

Burger was replicating an experiment published in 1961 by Yale University professor Stanley Milgram, in which volunteers were asked to deliver electric “shocks” to other people if they answered certain questions incorrectly.

Milgram found that, after hearing an actor cry out in pain at 150 volts, 82.5 percent of participants continued administering shocks, most to the maximum 450 volts.

The experiment surprised psychologists and no one has tried to replicate it because of the distress suffered by many of the volunteers who believed they were shocking another person.

“When you hear the man scream and say, ‘let me out, I can’t stand it,’ that is the point when the real stress that people criticized Milgram for kicked in,” Burger said.

“It was a very, very, very stressful experience for many of the participants. That is the reason no one can ethically replicate the experiment today.”

Burger modified the experiment, by stopping at the 150 volt point for the 29 men and 41 women in his experiment. He measured how many of his volunteers began to deliver another shock when prompted by the experiment’s leader — but instead of letting them do so, stopped them.

In Milgram’s original experiment, 150 volts seemed to be the turning point.

In Burger’s modified experiment, 70 percent of the volunteers were willing to give shocks greater than 150 volts.

At one point, researchers brought in a volunteer who knew what was going on and refused to administer shocks beyond 150 volts. Despite the example, 63 percent of the participants continued administering shocks past 150 volts.

“That was surprising and disappointing,” Burger said.

Burger found no differences among his volunteers, aged 20 to 81, and carefully screened them to be average representatives of the U.S. public.

Burger said the experiment, published in the American Psychologist, can only partly explain the widely reported prisoner abuse at the U.S.-run Abu Ghraib prison in Iraq or events during World War Two.

“Although one must be cautious when making the leap from laboratory studies to complex social behaviors such as genocide, understanding the social psychological factors that contribute to people acting in unexpected and unsettling ways is important,” he wrote.

“It is not that there is something wrong with the people,” Burger said. “The idea has been somehow there was this characteristic that people had back in the early 1960s that they were somehow more prone to obedience.”