“The government has tried hard not to connect what is happening with the problems of young people. The government says one boy died, his friends are angry, they over-reacted then anarchists came to join in the game. But this is not the reality.”

Greece’s riots are a sign of the economic times. Other countries should beware, says Peter Popham in Athens 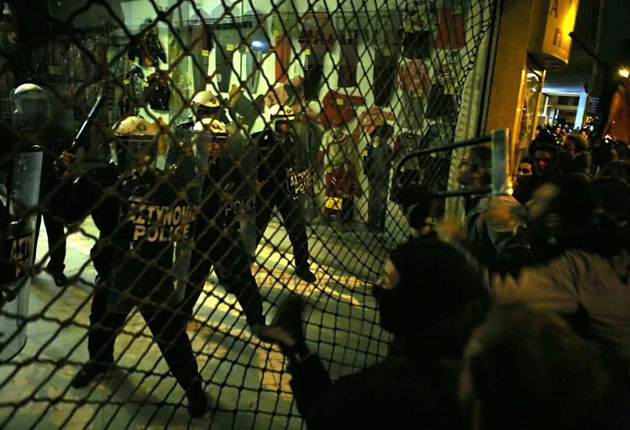 After firing 4,600 tear-gas canisters in the past week, the Greek police have nearly exhausted their stock. As they seek emergency supplies from Israel and Germany, still the petrol bombs and stones of the protesters rain down, with clashes again outside parliament yesterday.

Bringing together youths in their early twenties struggling to survive amid mass youth unemployment and schoolchildren swotting for highly competitive university exams that may not ultimately help them in a treacherous jobs market, the events of the past week could be called the first credit-crunch riots. There have been smaller-scale sympathy attacks from Moscow to Copenhagen, and economists say countries with similarly high youth unemployment problems such as Spain and Italy should prepare for unrest.

Ostensibly, the trigger for the Greek violence was the police shooting of a 15-year-old boy, Alexis Grigoropoulos. A forensic report leaked to Greek newspapers indicated he was killed by a direct shot, not a ricochet as the policeman’s lawyer had claimed. The first protesters were on the streets of Athens within 90 minutes of Alexis’s death, the start of the most traumatic week Greece has endured for decades. The destructiveness of the daily protests, which left many stores in Athens’s smartest shopping area in ruins and caused an estimated €2bn (£1.79bn) in damage, has stunned Greece and baffled the world. And there was no let-up yesterday, as angry youths shrugged off torrential rain to pelt police with firebombs and stones, block major roads and occupy a private radio station.

Their parents grope for explanations. Tonia Katerini, whose 17-year-old son Michalis was out on the streets the day after the killing, emphasised the normality of the protesters. “It’s not just 20 or 30 people, we’re talking about 1,000 young people. These are not people who live in the dark, they are the sort you see in the cafes. The criminals and drug addicts turned up later, to loot the stores. The children were very angry that one of them had been killed; and they wanted the whole society not to sleep quietly about this, they wanted everyone to feel the same fear they felt. And they were also expressing anger towards society, towards the religion of consumerism, the polarisation of society between the few haves and the many have-nots.”

Protest has long been a rite of passage for urban Greek youth. The downfall of the military dictatorship in 1974 is popularly ascribed to a student uprising; the truth was more complicated, but that is the version that has entered student mythology, giving them an enduring sense of their potential. So no one was surprised that Alexis’s death a week ago today brought his fellow teenagers on to the streets. But why were the protests so impassioned and long-lasting? “The death of this young boy was a catalyst that brought out all the problems of society and of youth that have been piling up all these years and left to one side with no solutions,” said Nikos Mouzelis, emeritus professor of sociology at LSE. “Every day, the youth of this country experiences further marginalisation.”

Although Greece’s headline unemployment of 7.4 per cent is just below the eurozone average, the OECD estimates that unemployment among those aged 15 to 24 is 22 per cent, although some economists put the real figure at more like 30 per cent.

“Because of unemployment, a quarter of those under 25 are below the poverty line,” said Petros Linardos, an economist at the Labour Institute of the Greek trade unions. “That percentage has been increasing for the past 10 years. There is a diffused, widespread feeling that there are no prospects. This is a period when everyone is afraid of the future because of the economic crisis. There is a general feeling that things are going to get worse. And there is no real initiative from the government.”

For Greek youngsters such as Michalis Katerini, job prospects are not rosy, but without a university degree they would be far worse, so he and his mother are making serious sacrifices to get him into further education. So inadequate is the teaching in his state high school that he, like tens of thousands of others across the country, must study three hours per night, five nights a week at cramming school after regular school, to have a hope of attaining the high grades required to get the university course of his choice. His mother, whose work as an architect is down 20 per cent on last year, must pay €800 a month to the crammer for the last, crucial year of high school.

She believes the government of Prime Minister Costas Karamanlis faces more turbulence if it fails to grasp the reality of the past week, and pass it off as a spontaneous over-reaction. “The government has tried hard not to connect what is happening with the problems of young people. The government says one boy died, his friends are angry, they over-reacted then anarchists came to join in the game. But this is not the reality.”

Vicky Stamatiadou, a kindergarten teacher in the rich northern suburbs with two teenage sons, agrees. “Until now, our society was full of dirty but calm water; nothing was moving, nothing improving, all the problems of our society remained unsolved for years. People pretended that everything was going well. But now this false picture has been broken and we are facing reality.”

Greece’s official youth unemployment statistics are not far removed from the rates in other European countries with a history of mass protest, such as France, Italy and Spain. With the graffiti “The Coming Insurrection” plastered near the Greek consulate in Bordeaux this week, the warning signs to the rest of the continent’s leaders are clear.