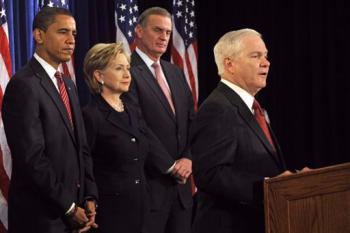 WASHINGTON (AFP) – President-elect Barack Obama rode a wave of anti-war sentiment to the White House but he vowed to maintain “the strongest military on the planet.”

Democrats who would like to turn guns into butter, particularly during an economic crisis, may be disappointed.

But Obama, in his choice of national security advisers and the priorities he set for them at a press event in Chicago, signalled that he intends to move cautiously during “an unprecedented transition amidst two wars.”

He retained Defense Secretary Robert Gates , praising him for his handling of “a difficult situation” in Iraq but soft peddling their differences over the pace of a US withdrawal.

On the stage with him stood a team of advisers that, besides Gates, included his Democratic rival for the presidency, Hillary Clinton , who campaigned on her readiness to lead in a crisis.

For his national security adviser, Obama chose retired general Jim Jones , a man with extensive military experience, a feel for diplomacy and close ties to moderate Republicans like Senator John McCain, who lost the presidential race to Obama.

“There have been fears in some corridors that Obama was going to be a left wing ideologue; the McCain campaign was trying to portray him that way,” he said.

“And I think especially in a time of war and financial crisis the administration is trying to convey the idea that they’re not going to do extreme things in either direction,” he said.

Michael O’Hanlon, an expert at the Brookings Institution, said there were also concerns that foreign powers — Russia, perhaps, or Iran — might want to test Obama early in his term.

“He’s got to make it clear that he is not (to be) pushed around,” he said.

Obama stressed the importance of coupling a strong military with diplomacy and renewed attention to alliances.

But he is inheriting a military whose ground forces have been strained to the maximum by the wars in Iraq and Afghanistan, with combat units in their third and fourth deployments with only a year in between.

Although it’s probably the most battle hardened counter-insurgency force in the world today, US military leaders have warned it is ill prepared to respond to crises elsewhere.

“The army is in terrible shape, in terms of the quality of the people they are taking in, and they are losing a lot of their middle grade officers and their future leaders,” said Lawrence Korb, a former Pentagon manpower and readiness chief.

“So you really do have a very difficult organization you’re taking over in terms of the personnel the readiness of the forces and the modernization,” he said.

Obama has endorsed a costly 100,000 troop expansion of the army and marine corps that was begun under the Bush administration to ease the strains on the force.

Even after US troops are out of Iraq, his administration will face an estimated 100 billion dollar bill for replacing war damaged equipment and refitting US ground forces long.

But as recession bites and revenues decline, hard questions are bound to be asked about the Pentagon’s 512 billion dollar base budget, the largest ever, which does not include the operational costs of the wars in Iraq and Afghanistan.

“I think the consensus even before Obama was elected was that given the decline in revenues, for example, you could not continue the same rate of growth in defense,” said Korb.

“The question becomes what will be the growth. Will it be enough to keep pace with inflation or will we see a real decline in the defense budget?” he said.