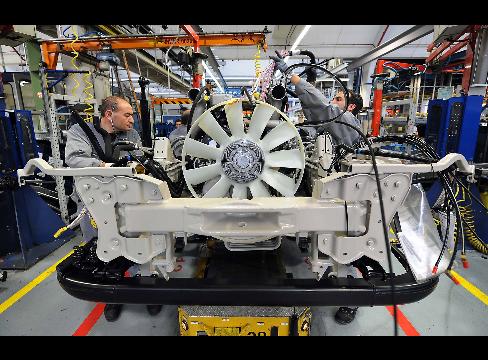 Dec. 1 (Bloomberg) — Manufacturing shrank around the world as the financial crisis enters its 17th month, providing fresh evidence that the global economy is in recession and intensifying pressure on policy makers to respond.

Signs the worldwide slump is worsening pushed down stocks and sent yields on U.S. Treasuries to record lows as investors sought the safest assets. Manufacturers are suffering as the persistent lack of credit hammers demand from companies and consumers, forcing them to cut output and jobs.

“The pace of manufacturing decline has been vicious,” said Kevin Gaynor, head of economic and interest-rate strategy at Royal Bank of Scotland Group Plc in London. “If we thought the last quarter was bad for the global economy, the current quarter is shaping up to be a lot worse.”

With the financial crisis that began in August 2007 now morphing into a worldwide economic downturn, economists at JPMorgan Chase & Co. estimate industrial production will decline in developed markets this quarter by the most since 1980.

The MSCI World index of stocks in 23 developed markets today fell 3.9 percent to 857.72 at 2:49 p.m. in London as the deterioration in manufacturing unnerved investors. The yield on two-year U.S. notes dropped as low as 0.95 percent and the rate on 30-year bonds fell to a record 3.387 percent.

The Institute for Supply Management’s U.S. factory index dropped to 36.2, the lowest since 1982, the Tempe, Arizona-based group reported today. A reading of 50 is the dividing line between expansion and contraction. The index was projected to drop to 37, according to the median of 61 economists’ forecasts in a Bloomberg News survey.

That leaves economists forecasting one of the most severe U.S. recessions in the postwar era, forcing the Federal Reserve to consider more interest rate cuts and incoming President Barack Obama to mull a stimulus program.

Manufacturing in the 15 nations sharing the euro contracted by the most on record in November. A purchasing managers’ index dropped to 35.6 from 41.1 in October, remaining below the expansion threshold for a sixth month. That’s the lowest since Markit Economics began the poll in 1998, and below an initial estimate of 36.2 published on Nov. 21.

With the euro-region economy already in its first recession in 15 years, the malaise leaves the European Central Bank facing calls to accelerate the pace of interest rate cuts this week. Having reduced its benchmark rate twice by 50-basis points since early October, investors are betting the Frankfurt-based bank may lower it as much as three-quarters of a percentage point when its governing council convenes on Dec. 4.

Rautaruukki Oyj, Finland’s biggest producer of carbon steel, said today it will cut output and as much as 6.7 percent of its workforce, reducing annual costs by 60 million euros ($75.9 million), on weaker demand.

“There is a compelling case for the ECB to slash interest rates by 100 basis points” for the first time, said Howard Archer, an economist at IHS Global Insight in London.

Investors are already predicting the Bank of England will cut its key rate by at least a percentage point the same day, having slashed by 1.5 points last month, the biggest reduction in 16 years. Chancellor of the Exchequer Alistair Darling said yesterday he may need to take additional steps to combat the slump.

“Interest rates have got to fall significantly further,” said Nick Kounis, an economist at Fortis in Amsterdam and a former U.K. Treasury official.

The slump in industrial economies is now infecting emerging markets, depriving the world of power it was relying on to cushion the slowdown. Manufacturing in China, the fastest- growing major economy, fell by the most on record in November, the China Federation of Logistics and Purchasing reported today. Its purchasing managers’ index fell to a seasonally adjusted 38.8 from 44.6 in October.

“Another grim month for China manufacturing,” said Eric Fishwick, head of economic research at CLSA Asia-Pacific Markets in Hong Kong, whose own index for China showed a record drop. “Export orders will weaken further and we expect further cuts in production and employment.”

The yuan fell the most since a fixed exchange rate ended in 2005, sliding 0.7 percent to close at 6.8848 per dollar. Economists at Citigroup Inc. said “more immediate policy help” was now needed on top of last month’s $586 billion stimulus package and biggest interest-rate cut in 11 years.

In Russia, VTB Bank Europe said its measure of purchasing managers fell for a fourth month in November to 39.8, below the level recorded in 1998 when the government devalued the ruble and defaulted on $40 billion of debt.

OAO Severstal, Russia’s largest steelmaker, shut down a blast furnace that supplied 13 percent of the pig iron produced at its main Russian factory because of its age and as global steel demand weakens, the company said on Nov. 28.

“The sense of doom and gloom was only deepening” in November, Tatiana Orlova an economist in Moscow at ING Group NV said. “The mood isn’t getting any better.”

Indexes for Poland, Hungary, Sweden and the Czech Republic also showed some of the steepest-ever declines as recession struck their main export markets. South African manufacturing shrank at the fastest pace in at least nine years, pushing Investec Asset Management’s Purchasing Managers Index to 39.5 last month from 46.2 in October.

To contact the reporter on this story: Simon Kennedy in London at skennedy4@bloomberg.net