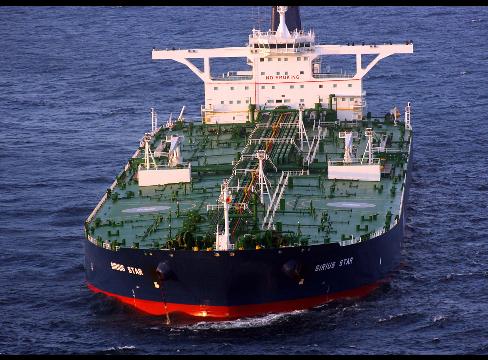 The ransom may be the highest sum demanded by pirates from war-torn Somalia, which hasn’t had an effective government since the 1991 fall of the Siad Barre regime. Typically, they have asked for an average of $1 million per ship this year, the London-based research organization Chatham House says.

Since January, at least 91 vessels have been attacked in the Gulf of Aden, an area almost twice the size of Alaska flanked by Yemen and Somalia. The hijacking of the Saudi ship was the most brazen assault yet, as it was the largest seized and the farthest out from the coast that pirates have struck.

Sirius Star “is a difficult boat to storm and the risk would be very high,” Roger Middleton, an analyst at Chatham House, said. The Puntland administration has carried out at least two successful rescue attempts in the past “but in those instances there were links between the administration and the cargo on the ship so there was a financial incentive.”

The seizure of the oil tanker may push Western navies to step up their actions against hijackers, who find potential targets with GPS navigational aids and satellite phones and use captured fishing trawlers to launch attacks out at sea, according to Chatham House.

The North Atlantic Treaty Organization, which has a four- warship anti-piracy fleet off Somalia, is considering changes to its operations in the area, even if it isn’t immediately planning to send more ships, Admiral Giampaolo Di Paola, chairman of the alliance’s military committee, said at a news conference in Brussels yesterday.

Germany’s parliament will vote this month or next on whether to join a European Union fleet expected to reach the zone next month, and Russia is likely to add to its one ship in the area, the Neustrashimy, or Intrepid, a navy spokesman said.

India and Malaysia already have warships in the region and the U.S. coalition in Afghanistan has a task force in the area.

In total, there are about 15 warships off the Somali coast, French military spokesman Christophe Prazuck said.

The Pentagon has urged shipping companies to step up their own security provisions.

“It’s incumbent upon the companies to look more and more at what they can do to try to prevent these incidents,” Defense Department spokesman Geoff Morrell said yesterday. Possible measures include posting lookouts and investing in methods to keep pirates from boarding, he said.

Morrell added that U.S. diplomats are working at the United Nations to win renewal of a UN Security Council resolution, due to expire Dec. 2, that authorizes counter-piracy operations within the territorial waters of Somalia.

A man claiming to be one of pirates holding the Sirius Star yesterday assured the safety of any ship carrying the ransom in an audio tape aired by Al Jazeera television, and said his group has machines to detect counterfeit money. Saudi Foreign Minister Prince Saud al-Faisal confirmed yesterday in Rome that negotiations between Vela and the raiders were under way.

Chatham House’s Middleton said pirates demand a greater sum than they expect to receive and that the group holding the Saudi tanker would probably be paid more than $2 million. Maritime security specialists told Lloyd’s List earlier this week they expected the pirates to table an opening demand of $20-50 million before settling for $5-10 million.

Other pirates in Harardhare are prepared to help those who captured the Saudi ship should they require assistance, Bile Mohamoud Qabowsade, an adviser to Puntland President Adde Muse, told Bloomberg News in a telephone interview.

Andrew Mwangura, head of the Seafarers’ Assistance Program in Mombassa, Kenya, confirmed in a telephone interview that the pirates were asking for $25 million, adding “I don’t think that the Somali pirates can do anything if the ransom is not paid within 10 days.”

The Sirius Star’s crew includes citizens of Croatia, the U.K., the Philippines, Poland and Saudi Arabia. It is anchored at sea between the towns of Faah and Gaan near Harardhere and was bound for St. Eustatius in the Caribbean Sea on its original course, according to data compiled by Bloomberg.

Jean Ping, chairman of the African Union Commission, said today that piracy off the coast of Somalia indicated a further deterioration in the country’s political situation. He called in an e-mailed statement for “more sustained and coordinated efforts by the international community to support the peace efforts in Somalia, including the early deployment of United Nations peacekeeping forces.”

To contact the reporters on this story: Caroline Alexander in London at calexander1@bloomberg.net; Hamsa Omar in Mogadishu via Johannesburg at pmrichardson@bloomberg.net.