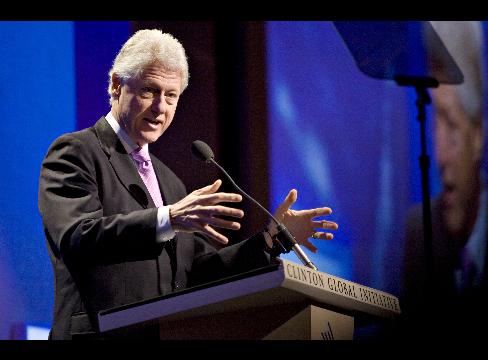 Nov. 20 (Bloomberg) — Bill Clinton has sent President- elect Barack Obama‘s transition team a list of more than 200,000 donors to his foundation, according to a Democrat familiar with the process, the latest sign both sides are trying to clear obstacles to Hillary Clinton‘s possible nomination as U.S. secretary of state.

“I’ll do whatever they want,” the former president told reporters in New York yesterday. “This is a deal between” Obama “and Hillary,” he said.

The 200,000 or so names comprise the universe of donors to Clinton’s presidential library and foundation. This is separate from the Clinton Global Initiative, which operates under the aegis of the foundation but does not directly take money from the donors.

The list of contributors ranges from those who gave a few dollars to wealthy foreign leaders and business people who donated multimillion-dollar gifts, the Democrat familiar with the matter said.

Clinton may attempt to avoid publicly releasing the names of donors because many may have expected to remain confidential when they contributed. The Clinton and Obama teams could seek donors’ permission to reveal their names — a potentially lengthy process. The Wall Street Journal earlier reported Clinton would publicly disclose some donor information to the Obama transition team.

During Hillary Clinton‘s presidential campaign, the former president said he would release information on future donors if she were elected.

Senator Clinton traveled to Chicago last week to meet with Obama about the Cabinet position. The process has been complicated by concerns that the former president’s private business interests with foreign governments and companies could create conflicts for his wife if she were the top U.S. diplomat.

Obama hasn’t offered the job to the New York senator, his former rival for the Democratic presidential nomination, and she hasn’t decided if she would take it, the Democrat familiar with the process said.

In another Cabinet development, former South Dakota Senator Tom Daschle has accepted Obama’s offer to become Health and Human Services secretary and lead the effort to revamp the U.S. health-care system, a Democratic official familiar with the matter said yesterday.

If Hillary Clinton were to become secretary of state, her husband might decide to unwind his investments as the Clintons promised he would do if she were elected president.

These include three Cayman Islands investment entities that Clinton joined through Yucaipa Cos. LLC, a company controlled by California billionaire Ron Burkle. Dubai Investment Group, an investment vehicle of the ruler of Dubai, Sheikh Mohammed bin Rashid al-Maktoum, has been among the partners with Burkle and Clinton in the Cayman Islands.

During the primary campaign, Matt McKenna, a spokesman for Bill Clinton, said that, while the former president hadn’t then “severed ties” with Yucaipa, he “is taking steps to ensure” that “there will be an appropriate transition for those relationships” if his wife won the Democratic presidential nomination.

Clinton’s office and a spokesman for Yucaipa would not say yesterday if he has withdrawn from his Yucaipa involvement.

To contact the reporter on this story: Timothy J. Burger in Washington at Tburger2@bloomberg.net